today is friday, people! which means only one thing. it’s book club day! i belong to ‘THE GOOD BOOK APPRECIATION SOCIETY’ which is awesome. we meet every friday at lunch time, in the library, with the candlestick.

i love my book club, it seriously makes the week worth living. anyway, nerd much?
so all that being said, i thought today a fitting day to bring in a book to review. ok, so all present and accounted for? excellent.
first point of business: when we first discussed doing the odd book review here on the blog i never said it would be all literary.

so forget JM Coetzee, Jim Crace and Steven Tolz for now (well don’t forget them altogether please, cos they’re all fricken’ geniuses, but let’s just put them on the back burner for a second), i bring you – F**K You, Penguin.

it’s a gifty joke book published by Harper Collins, who must have taken great delight in the title. 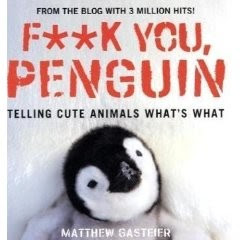 This book is based on a blog of the same name and it’s a series of pictures of those cute and crazy animals one finds all over the internet, each with a bitterly funny and funnily bitter commentary, by author Matthew Gasteier.

Not the kind of book you read from cover to cover, but more something you pick up and dip into at random, when you’re feeling like a particularly warped and cynical laugh.

It will make the perfect gift for your more twisted mates. 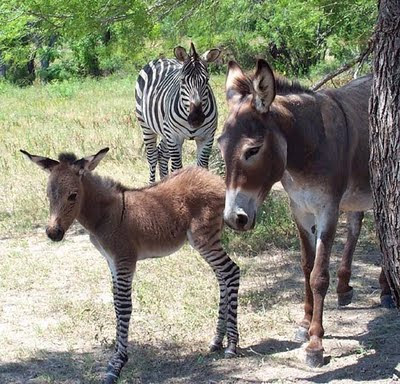 ‘Enter the zonkey. One part zebra, one part donkey, a million parts out of control. Striped black and white legs and a brown body? This is a fucking disaster. What happened to properly mixing your heritage, Zonkey? You aren’t supposed to look like napoleonneapolitan ice cream, here, YOU ARE A FUCKING ANIMAL.’

you tell that zonkey, matt. give it a fucking piece of your mind. how dare it be so cute! i mean seriously, a zonkey! even the name is cute. i wasn’t ever planning on getting a pet. i think cats are too devious and self-satisfied for me, particularly the ones who like to wear wigs, and dogs are just big vats of saliva, but now i’m thinking i might have to revise that clause, if i could just have a zonkey!

SEA LIONS USE FLIPPERS AS AN EXCUSE 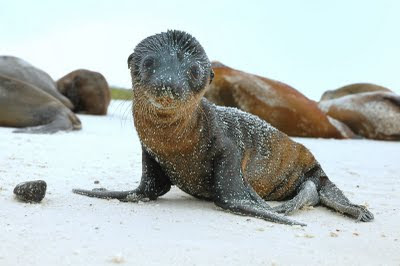 Not having normal arms and legs is no reason to avoid taking care of yourself, Sea Lion. The water is literally right there, would it have killed you to say to the photographer, “You know what? Hold on one second, I’m just going to wash off this sand that is covering my entire body.” I’ll tell you one thing, there’s no way my dad would have let you in his car in 1989.

like i said, this guy is one cynical fucker, but i guess that’s kind of what i dig about him.

here’s another one about the beaver. but i mean really, with a name like ‘beaver’ this species
is sort of just asking for a punch in the nuts. 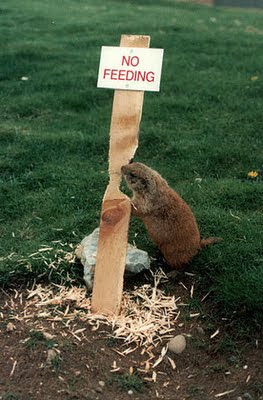 If there’s one thing I hate, it’s animals that try to live their lives like high-concept performance pieces. I bet this beaver literally shit his pants when he saw this sign (which is most likely why he is not wearing pants). “Oh man,” he probably thought to himself, tapping his fingers together, “it says no feeding. But the sign’s post is made out of wood. This is going to be better than the time I made a dam out of copies of Salmon Rushdie’s The Satanic Verses.”

funny guy (matt, not the beaver). flippen sick, but funny.

here’s a last one, just for kicks:

DON’T EVEN THINK ABOUT TRYING TO SNEAK UP ON ME: 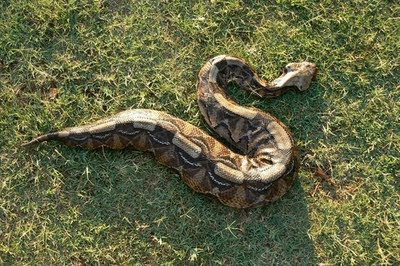 ‘Hey buddy, nice head. What, were all the proportional heads taken? I did a little math, and even if I lost one leg, I’d still have 100% more legs than you. So suck on that.’