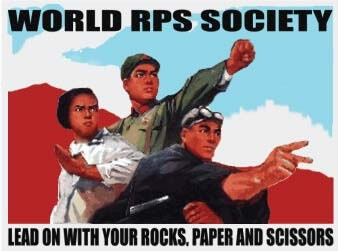 Morning, here’s Sunday’s column. Hope you enjoy. If not, I’ll rock, paper, scissors you to see who writes the next one.

I never actually learnt how to ride a bicycle. I was the laat lametjie at the end of a long queue of children, so by the time they got to me, the shine of spending a day running alongside a kid on a bike yelling ‘pedal, pedal!’, had worn off. I do know how to tie my own shoelaces, copy every word you say till you want to murder me, fend off a noogie and give a mean Chinese bracelet though, and in a big household those are the real life or death skills.

So I’m not that sporty, which means I couldn’t drop and give you fifty, hell, it’s likely that I couldn’t even drop and give you five, but that doesn’t mean I’m not competitive. Which is why I’m always pleased to discover new sports that are hotly contested around the world, that don’t require short shorts, or a core. Such as chess, which is considered an Olympic sport. Or Dominoes, which isn’t.

The USA Rock Paper Scissors (RPS) Championships are sposored by Anheuser-Busch. They have tournaments in bars nationwide, which produce a series of winners, who compete in Vegas for $50 000. And the Rock, Paper, Scissors World Championships are in Toronto every year, with competitors from as far afield as Norway, Singapore and Australia.

The game is said to have originated in Japan, possibly even as early as 200BC, the actual year is hard to corroborate, but it was long time ago. And to this day, the game remains a simple one. Each player shakes their fist a few times, then extends their hand in a shape, which either symbolises a rock (clenched fist), piece of paper (out flat), or scissors (two fingers extended to mimic a pair of scissors).

Paper beats rock by covering it, rock beats scissors by crushing them, and scissors beat paper by cutting it. And that’s how we’ve been figuring out who gets to sit in the front seat, who has to take out the bins, and who’s going home with the blonde and who gets the brunette, for decades.

Historically it’s been used to solve big problems too. Legend has it that in 2005 a businessman in Japan wanted to auction off his extensive art collection, which contained pieces by Cezanne, Picasso and Van Gogh, but he couldn’t decide which auction house to go with. So he made Christies and Sotheby’s compete in a game of Rock, Paper, Scissors. They both spent a weekend strategizing, then they played, Christies won. Scissors beat paper every time.

There are sub-versions of the game around the world too. In Indonesia they have an elephant, a person and an ant. The elephant crushes the person, the person crushes the ant, and the ant crawls in the elephant’s ear and drives it crazy.

And in Japan they invented a robot that beats humans at Rock Paper Scissors every single time. If you pitted two of these robots against each other, so they had an infinite tie, would dinosaurs come back, and would Arnold Shwarzenegger be the next president of America?

But seriously, this is serious. There’s even a World Rock, Paper, Scissors Responsibility Code, which states that players must get penalised for making invented throws, such as the ‘live long and prosper’, the ‘devil’s horns’, or the ‘I got your nose’, and double penalties for ‘flipping the bird’ – bad losers are not welcome.

I wonder how the ancient Japanese first decided in which order to put the game? Did they play a competitive game of scissors, paper, rock? Or maybe it was a round of paper, rock, scissors, best of three.

2 responses to “Best of three”