Are you living up to your name?

Ahhh monday, can you smell it? The sadness, the deadlines, the traffic?

Well unfortunately I can’t make it go away entirely, but i can make it fade off into the distance for between 3 to 6 minutes, depending how slow a reader you are.
This week’s column comes with visual aids.
hope you enjoy.
A MILLION MILES FROM NORMAL – By Paige Nick
ARE YOU LIVING UP TO YOUR NAME?

A friend is having a baby in a few weeks, so there’s been much discussion and debate around potential baby names lately. It’s a huge decision. According to research (both my own and a bunch of people who are way smarter than me) the name you’re given may have lifelong consequences. No pressure or anything.

For example, do you think a Bambi, Holly or Candi is more likely to grow up to be a stripper, than say a Doris or a Bertha? And if you called your son Baksteen or Kopstamp, would he ever have even half a chance of becoming the principal dancer for the Royal Ballet Company?

I have a vested interest in this conversation. Not the stripper part, but the part where your name might just influence your future path. With a name like Paige Nick (or Paper Cut, as I’m sometimes called), Io ften wonder if I ever really had much of a choice other than to become a writer.

In 1994, The New Scientist Journal coined the term ‘Nominative Determinism’, to describe the theory whereby a person’s name plays a significant role in determining the choices they make, the character they develop, or the profession they choose to follow.

Which is interesting, if you consider that historically the opposite was true, and tons of common surnames actually come from the professions those people did. For example, people with the surnames; Butcher, Baker, Fisher, Taylor and Douchebag were called that because they were actually butchers, bakers, fishermen, tailors or douchebags. Back then, if you did that, you were that. Nowadays it seems to be the other way around.

Do you think Usain Bolt would have become a sprinting super-legend, if he’d been named Usain Slow-jog instead? And what about Tiger Woods or William Wordsworth? Would we have been robbed ofa great golfer and a great poet had their names differed by just a couple of syllables? Would William Wordswidth have become a champion short-distance swimmer instead?

Other interesting cases that prove the theory of Nominative Determinism include the little-known fact that Buzz Aldrin’s mother’s name was Marion Moon, and that there’s a Russian springboard diver named Svetlana Filippova and a tennis player named Anna Smashnova.

There are dozens of other examples. An article on incontinence appeared in the British Journalof Urology in 1977, written by one A.J. Splatt and his colleague D. Weedon. And the University of Arizona have kindly compiled a list of aptly named real live practitioners for patients with a bladder infection and a sense of humour.

Take urologist Nicholas Burns-Cox for example, or if you’re looking for a dentist, you should look no further than Dr Pullen, Dr Fillmore or Dr Hurt, all legitimate dentists on the list. Or perhaps you need a dermatologist? Then you couldn’t possibly go wrong with Dr Spot, Dr Rash or Dr Whitehead.

If the theoryholds any truth, then John Wayne Bobbit has an awful lot to be thankful for. His ex wife, Lorena could have been called Lorena Hatchet instead, and then his story may have been cut even shorter than it was.

And this theory doesn’t just hold true overseas. I’m not sure whether it’s our strong belief in the power of positive thinking, or simply the result of the language barriers we face with our eleven official languages,but nowhere in the world will you find more excellent examples of Nominative Determinism than right here in South Africa.

The security guard at a friend’s office is named Surveillance Nozizwe, and I’ve also heard of a local petrol attendant named Castrol.

Someone else I know works at a hospital where they keep a list of all the great South African names they come across in the maternity ward. These babies are clearly named in the hopes they will grow up to embrace their names, like one young child hopefully named Matric Examsion Phelephe, or his neighbour in the next bassinette, Richman Mthembo. 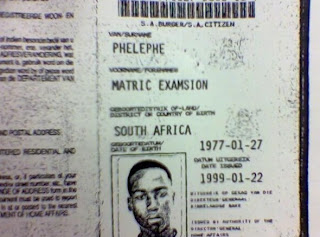 I’m not sure what future hopes and dreams Captain Morgan Ndlovu’s parents had in mind, but hopefully it’s just the Captain part they were keen for their baby to embrace. 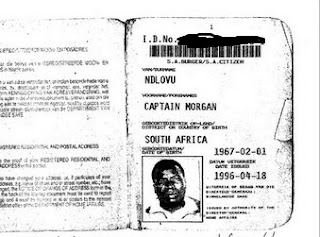 While looking at some of the other names on the list, you can onlyguess they were selected at birth based on the child’s characteristics, more than their future aspirations, such as No-Pinky Mashweshwe, or Cry Baby Boniwe.

And if only we had a Rand for every time someone in this country was named Two-Rand, like a colleague of mine’s gardener, Two-Rand Ndlovu (or Fifty Cent, as he’s called in America, thanks to the exchange rate). 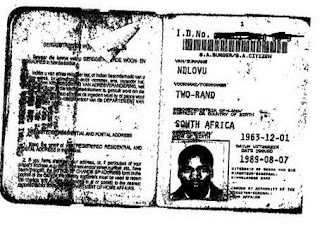 And by far the best one I’ve ever seen was one gentleman named Doctor Pastor Wordsmith Success Khuzwayo. His parents weren’t taking anychances there. I wonder if that’s in order of what they’re hoping he’s going to become. If he doesn’t make a doctor, which is obviously first prize, Mr and MrsKhuzwayo’s second hope is that he becomes a pastor. And if not a pastor, than maybe a wordsmith, and if none of the above, they’d be happy if he was simply just a success.

Now I only wish that my parents had thought to make my middle name‘Wealthy’, instead of ‘Trouble’.

4 responses to “Are you living up to your name?”