Monday again. Morning happy campers.
Speaking of happy camping (see what I did there) here’s yesterday’s Sunday Times Column. It’s about Glamping or rather Glamorous Camping. Are you a standard grade camper or a higher grade camper? And would you ever consider using an FUD?
A MILLION MILES FROM NORMAL – By Paige Nick
NOT A HAPPY CAMPER
A friend of mine is going camping for a ridiculous amount of time. Her and her boyfriend have both taken leave of absence from work and they’re driving his Land Rover to Uganda for three months. What? Did nobody show her the brochures for Mauritius?
Despite being sane, and thoughtful, and one of the more intelligent women I know, my friend is super-excited about the journey. I’m thinking that’s because she hasn’t had her shots yet.
I kid, I do sort of get why someone would want to do this. It’s probably the adventure of a lifetime if you’re into that kind of thing. And of course with something like this not only do you get the trip itself, but there’s also all that time spent planning and shopping for gear before you go.
In my experience there are two kinds of campers. The Camper-Campers and the Executive Campers. Or should we call them the Standard-grade Campers, and the Higher-grade Campers.
Standard-grade Campers are those people who simply roll up a sleeping bag and head into the woods with nothing more than a spade, a jumper, and a Leatherman. They don’t even take toilet paper, that’s what pine needles are for.
While Executive or Higher-grade Campers take a slightly different approach to the whole thing. These guys are all about the gear. Their main aim seems to be to replicate their actual homes, in miniature, in the outdoors. Have you seen the kind of kit that’s available to the avid Executive Camper these days? It’s ridiculous. You would be forgiven for walking into a Cape Union Mart and thinking you’d stumbled upon an @home store instead.
I’m always in two minds as to which of these two approaches is more appropriate. While getting away from it all is usually the point of going camping, if getting away from it all means getting away from a toilet, a shower and a bed, I’d probably like to remain stuck smack bang in the middle of it all, please.
My one mind says, if you’re taking everything with you, why go in the first place? Surely it’s just a much more expensive and stressful version of staying home. My other mind says, why on earth would you choose to be uncomfortable on your holiday, if you can just buy the stuff that makes camping a little less like camping? Did you know that you can get a camping hairdryer, to ensure you’re always looking your best for the bears and the lions?
My camping friend and her boyfriend won’t be taking a camping hair dryer, but she tells us that they will be taking a giant tent and erecting it on the roof of their Land Rover every night. She managed to make it sound even more glamorous when she informed us that it’s actually so cold in some of the places they’ll be staying, that they’ve heard tent zips have been known to freeze closed overnight. So if you wake up in the middle of the night and need to pee, the only way to unfreeze the zip is to urinate on it. Which sort of negates the point of getting up and unzipping the tent in order to go outside to make a pee in the first place, don’t you think?
‘Haven’t you had a hard enough life already?’ piped up one friend. ‘Can’t you stay at a B&B somewhere?’ Asked another. Although my friend informs us that even when they reach their destination after a month of travelling, camping and peeing on zips, they’ll still pretty much be a thousand kays away from ‘somewhere’.
While perusing their gear shopping list, my friend’s boyfriend, who sounds a little too much of the outdoorsy type for my liking, asked her if, considering the circumstances, she might be interested in an FUD. ‘A what now?’ she asked him. ‘An FUD, it’s a Female Urination Device’, he said.
Turns out it’s a plastic funnel-type-thingy that’s designed to fit, and then suction onto a woman’s lady parts, and then syphon the wee out through a penis-like spout. With it they say a woman can comfortably pee standing up. Yes ladies, at last, you too can avoid the queues, have bad aim and leave the seat up. 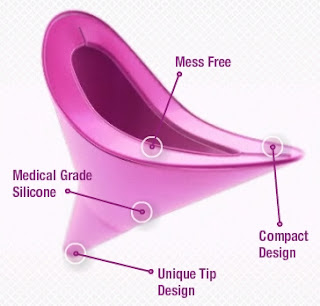 But in the end, my friend decided to go old-school with the whole peeing thing, and her dutiful boyfriend bought her a bottle of Stay Soft instead. The one with the extra-wide lid. So not only will she pee in the lid when it’s four am and minus seven billion degrees outside, but as an added bonus the bottle is dual purpose, and the contents of the bottle itself will keep their twelve layers of thermal underwear soft and fragrant while on the road. It’s this multi-purpose factor that I’m gathering is the key to good camping gear. Spades that double as blankets, jackets that moonlight as tent poles, and roof racks that roll out into a bedroom. For both the Camper-Camper and the Executive Camper, the more multi-functional the gear, the better.
So the upside of this whole ordeal is that at last, after thousands of years, women can finally pee standing up, should they want to. The downside is that first they have to agree to go camping. 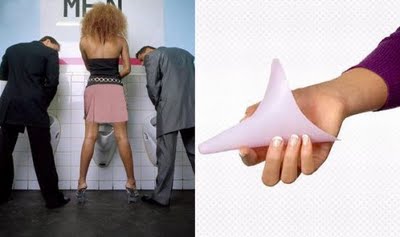 2 thoughts on “Anyone for glamping?”