‘And couples’ and breaking up

This column first appeared in the Sunday Times on 5th June, 2016.

We all know an ‘and couple’. They’re that pair who are so inextricably linked that even their names meld into one. Shaunandmichelle invited us to a braai, or Onieandmoe called. They finish each other’s sentences, know each other’s passwords, and in my mind, when they travel they share a suitcase. I respect it, but the thought of being in an ‘and couple’ gives me hives.

A few weeks ago we were at a bar on a weekend away, when one of my favourite ‘and couples’ told me they’d broken up. They were all smiles and dismissed it as ‘fine’ and ‘not such a big deal’. It was a mutual decision, they’d both moved on, were better off for it and were now even better friends, they said, as half the ‘and’ went to the bar to top up her exes drink. I was more upset about their break up than they were. Later they went back to their hotel room in fits of laughter, where the other half of the ‘and’ was going to (happily) sleep on the couch.

I tried to explain to them what it meant to be broken up, I felt like they were getting it all wrong. I remember being destroyed at reports of a recent ex-boyfriend spotted at The Function the night after we’d broken up, dancing like it was 1999 (which it was) and snogging some girl with a side ponytail (I just said it was 1999). It felt so cruel. How could he have gotten over our 5-month relationship so quickly and be out there already, with a smile and a blonde on his face, while I still needed to be scraped off the floor with a spatula.

I couldn’t figure it out, were Rebeccaandjeanine the worst broken up couple ever, or so evolved that they’d overtaken the rest of humanity?

When important relationships end, some people lose themselves in life. They get really busy, usually boning someone else. It gets their mind off the breakup and helps them move on. While others, like me, wallow and churn, incapable of moving on without closure, time and solutions.

It’s one of the reasons I don’t like soccer. I don’t know how fans can stand all those games that end in a low-scoring tie. If I’m going to commit to watching a game for two whole hours, I have to know who won at the end. Where’s the closure in a draw?

Although this clamour for closure doesn’t always end well. After she was surprise-dumped, a woman I know got her best friend to call the guy (while she listened on speakerphone) and tell him she had died. He was shocked and even had a small cry. My friend felt good for the first time since he’d dumped her. Until three days later when she bumped into him in Pick ‘n Pay. It was only two weeks after their break up, but I suspect that was all the closure he needed. 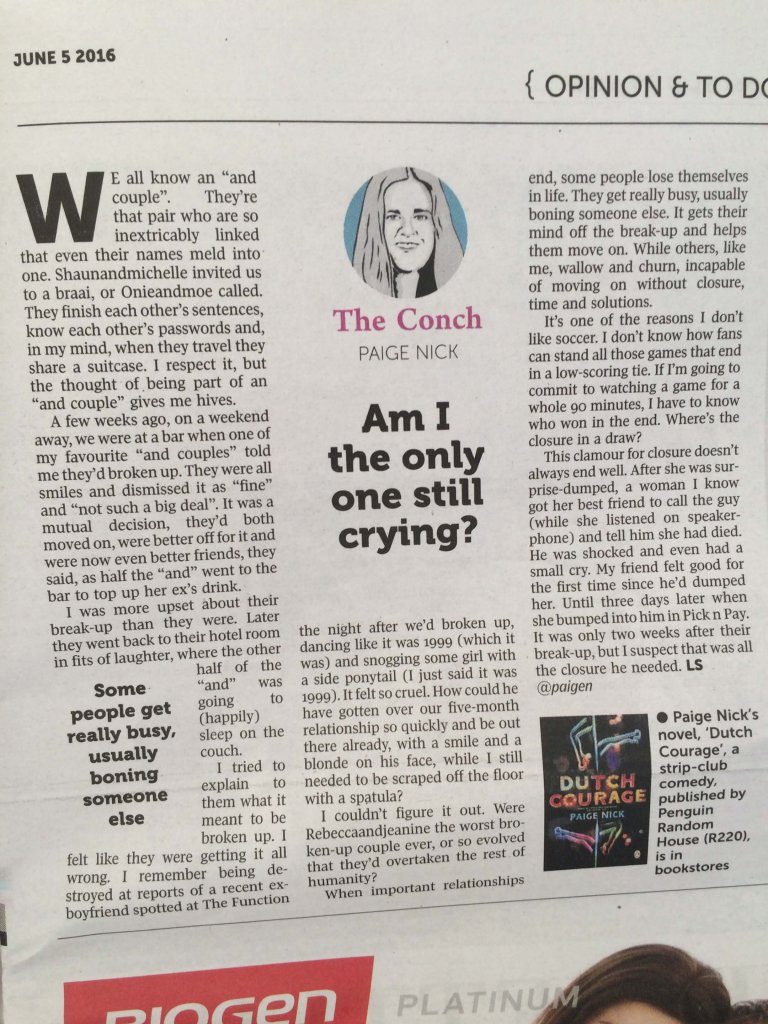