Best Monday ever, okay, so I wrote that on Sunday, so it may not be. Sorry.

As we speak there is a cat running for mayor in a town in Mexico. I guess they ran out of decent people to vote for and a feline was the next best thing?

The citizens of Xalapa, all four hundred thousand of them, are going to the polls on 7th July to cast their vote for a brand new mayor, and one of the candidates is a rather handsome cat named Morris. 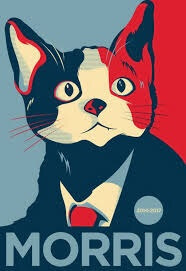 This isn’t the first time (or I suspect the last time) a cat has gone into politics. Last year a black and white cat named Tuxedo Stan ran for mayor of Halifax in Canada. His Campaign Manager (owner) started out with the gimmick in an attempt to raise awareness about the importance of neutering the cats in his community. One minute you’re trying to get the people in your neighbourhood to give their cats the chop, and the next thing you know, your kitteh is wearing a ‘vote for me’ badge, smoking a cigar, and sleeping with an intern.

It’s the tuxedo part that does it for me. I’d vote a lemur for mayor if you called it Tuxedo Lemur. But that’s just me. They do so raise the bar at any event. Tuxedos that is, not lemurs.

There’s also a small town in Alaska called Talkeetna (population eight hundred) that has had a cat for a mayor for the last 15 years. Well, less a mayor, and more just a cat with a business card and good connections.

About fifteen years ago the manager of Nagleys General Store in Talkeetna adopted the runt from a litter of stray kittens, and called it Stubbs, because of a broken tail. This runt must have a hell of a personality, because when the elections rolled around, and it turned out that nobody was all that crazy for the two available candidates on offer, Stubbs claimed the victory instead. It’s part tourist attraction, part political statement.

But back at the ranch in Mexico, if voted into office, Morris the mayoral Cat-idate promises to ‘rid the city of rats’, the wild sewer rodenty ones and the tamer, more corrupt human ones. He also promises to continue to lick his own bollocks, and see to it that taxes for all dogs are doubled.

Morris already has quite a strong constituency, with around eighty thousand followers on Facebook, and a growing entourage on Twitter. The human candidates should thank their opposable thumbs that a cat couldn’t technically actually win, because then they might have a bit of a fight on their hands.

It says a lot about the quality of the politicians we have available to us out there these days, don’t you think? That in these three instances, honest, rational human beings would be more likely to vote for a four-legged furball of questionable lineage, than an actual human being.

I want to know who cats have for a publicist, because they’re doing a fantastic job worldwide. Here’s a creature that often has a less than sparkly demeanour, an inflated self-opinion and tends to be somewhat demanding, yet they’ve managed to wrap just about all of us around their little retractable claws.

I was reading last week that famous international fashion designer, and creative director at Chanel, Karl Lagerfeld, has announced that he loves his cat so much, that he wants to marry it.
Imagine the dress. The animal’s name is Choupette and it lives quite a life. Chefs cook for it, and there are three maids dedicated to caring for it on a daily basis, catering to its every whim. The maids also have to write down every move the cat makes, so that Lagerfeld can check up on how his beloved is spending it’s time. I imagine the diary, ‘9am Choupette looked at me disdainfully. 9:13am Coupette licked tail. 9:37 Choupette slept…’

One cat running for mayor, another one about to become Frau Lagerfeld, what’s next, a dog for a president… oh wait. 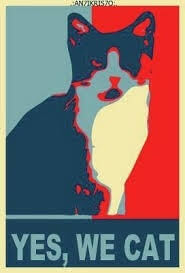