The other day I was browsing what’s available on my local dating website and the distressing possibility started to occur to me that I may have run out of men to date. What if, as a single person who’s been dating on and off for years, I’ve already worked my way through all the normal, appropriate, sane dudes out there, and now there are only the crazies left?

The smart, rational, well-balanced people seem to have all snapped each other up already, and are off cuddling smugly on their Wunders couches. Leaving behind a worrying situation whereby all that’s left is a bunch of lunatics all dating each other in a critical-mass of crazy.

Fortunately there is a little order in the world of lunacy, because single crazies can be broken down into a number of different categories, and some crazies can actually suit each other rather well. You’ve got your stalker crazies, your psychotic crazies, your commitment-phobic crazies (I’d hate to be tied to just one label, but I’m probably one of those), your hippie crazies, your bunny boiler crazies, and your all-out, no-holds-barred, cray-cray crazies.

But it’s okay, as long as the right kind of crazies are hooking up, everything might not end in tears or stab wounds. For example, your needy-stalker crazy and your commitment-phobic crazy generally don’t mix very well, for obvious reasons. But under the right circumstances, a hippie crazy and a psychotic crazy can actually get along together pretty well. There’s something about the calm of the hippie that settles the obsessive of the psychotic quite nicely. But expect large quantities of incense.

I don’t want you to think I’m lying to make friends when I talk about all the crazies out there, so I thought I’d share a couple of examples from the dating website, so you can see what us singles are left to deal with, while all you sane couples are off spooning. (Please send cheques in lieu of pity.)

When I came across this guy’s profile, it was his picture that first grabbed my attention. Not so much because I’m shallow, but more because it just looked so professional. Particularly in comparison to all the other profile pictures around it. I suppose he was sort of good-looking too, so maybe I am shallow. But when I clicked on it to take a closer look I noticed that in the top left-hand corner of the picture was a small, but reasonably visible watermark with the words ‘Getty Images©’ printed on it.

In case you’ve never heard of it, Getty Images is an online stock photography company. They offer a library of millions of professional stock photographs for clients to purchase, for use in print ads, brochures, and now clearly online dating profiles.

Unless ‘Chop101’ is actually a real Getty model, I can only imagine that this man has downloaded a picture of a male model off the internet, and then posted it as his profile picture, in order to improve his chances of getting lucky. But one does have to wonder why he didn’t crop out the Getty Images watermark that they place on the images specifically to prevent people from nicking the pictures off the internet without paying for them. Perhaps in his mind, the girl he’s looking for doesn’t have to be particularly smart.

The main problem I see with this kind of crazy is that when this guy finally hooks a chick, and they get to the part where they meet in real life, a girl would have to either be incredibly stupid or incredibly long-sighted not to notice that he looks nothing like his profile photograph. I’d love to see her face when she’s expecting a 6 foot 2 model, and she gets a 5 foot 4 boep instead.

Ironically in his profile he describes himself as ‘extremely honest’. I recommend caution, ladies. And perhaps a lie-detector test.

And it’s not just the single guys who are mad. Someone’s gone and sprinkled a little crazy in the single girls’ water supply too.

One particular brand of lady-crazy on the dating website stood out for me. This woman actually used her wedding photograph as her profile picture. Big poufy white dress, veil and all. 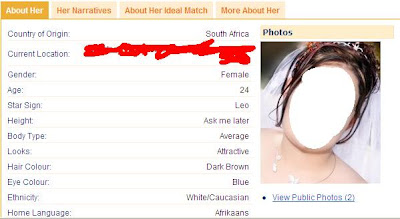 It just raises so many questions. Assuming she’s divorced, one wonders how long ago this picture of her was taken. Unless it was a Britney Spears type wedding, and only lasted 55 hours.

Surely she has other more recent and appropriate pictures of herself that she can share on a dating website, one that doesn’t show her taking another man, in sickness and in health, for ever and ever, till death does them part. (Perhaps by ‘for ever and ever’ they meant till next Tuesday, and by ‘until death does them part’, they meant until that cute redhead who works in accounts did them part.)

Hey I’m not entirely against crazy. On the contrary, dating the odd crazy here or there does help keep things interesting. But the fact that the last three guys I dated were completely nuts is definitely a cause for concern. How did I know they were crazy, you ask? I suppose it takes one to know one.