I kid you not, this is for real!

the ad below is exactly as it appeared in the newspaper. the critic found it and cut it out and gave it to me, and i rolled around on the floor laughing for about an hour, then i thanked her forty times and scanned it straight in as is. 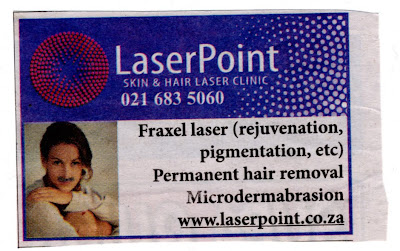 i’m almost lost for words. almost.
so many questions arise from this i almost don’t know where to start.
does that girl really have a moustache like that or did they comp it in?
or did they stick a fake one onto her for the shoot?
if they stuck a fake one on or comped it in, you’d think they might go for something a little more realistic, don’t you? like a pencil thin moustache, instead of the magnum they’ve whacked on there!
and then why make her pose like that, all sexy-like with her thick man’s moustache?
and what’s that on ‘her’ knee?
just so many unanswered questions.
i went to their website to do some research and see if there were any more photos of our russian friend.
Apparently they charge R300 a session for upper lip hair removal. you’d think they’d charge different ammounts, depending on the ladie’s style.
like if she has a goatee it should be more like R500, and one of those curly handlebar ones would be about a grand to remove i reckon, a neat pencil thin one could still be R300, and i’d say about R900 for a full magnum like this one.
it’s just a classic. i mean women with moustaches, is there anything funnier? and seriously folks, if that’s her for real, and if that’s what’s going on upstairs, one can only imagine what’s happening downstairs in the basement, if you get my drift?

One response to “women with moustaches”