Where did all the rock stars go?

There’s nothing quite like hotel sex. Maybe it’s the high thread-count, beds the size of a pacific island, or paying R400 for a dinky of JC Le Roux, that tricks us into believing we’re rich, which turns us on, and makes us want to have decadent sex.

Or perhaps it’s just that if you’re in a hotel room, someone else is looking after the kids, dogs, plant and pet mongoose, and you’re free for a change, which drives you wild with excitement.

Plus you don’t have to clean up. If you want to have swinging-from-the-chandeliers, couch-bed-floor-couch-bed-again sex at home, you’re faced with your own debauchery the next day, cleaning lubricant out of the shag carpet. You know how a cup of tea made for you by someone else, always tastes so much nicer? Sex is the same. Shagging on sheets you don’t have to wash and get dry before it rains, makes the sex so much hotter.

Although if you really consider where that hotel mattress, sheets and pillows have been, it’d be the last place you’d get naked. Hotel beds are like sausages, you shouldn’t think too much about what goes into them. Rather just let your animal instincts take over.

And do they ever! Rock stars and celebs have been losing their shit in hotel rooms for years, some quite literally. And I’m not just talking about leaving a messy room, I’m talking total carnage. I’ve seen pictures. It’s as if the room was first given to four-year olds without any adult supervision, then burgled, then trashed by a Mexican SWAT team looking for drugs, then burgled again.

In the eighties, Aerosmith would bring their own chainsaws to hotels so they could chop up the furniture more effectively.

Keith Moon, the drummer from The Who, was one of the greatest hotel room wreckers of all time. For his 21st, he threw a five-tier cake at his guests, started a food fight and multiple fire extinguisher free-for-all, slipping and knocking out his front teeth. When the cops arrived, he stripped, escaped in a Lincoln Continental, which he drove through a fence then crashed into the Holiday Inn’s swimming pool. Moon was also famous for nailing and strapping furniture to the ceiling.

While Keith Richards, was possibly the first to throw a television set out of his 10th story hotel window in 1972, which inspired decades of copycats. It only phased out more recently, when they started bolting flat-screens to the walls.

Marilyn Manson left a hotel room with a telephone stuck in a wall, burns in the carpets, and just about every surface stained with hair dye.  And Billy Idol once spent three weeks in a hotel in Bangkok, racking up twenty grand in damages and a sex and drug bill of about $250 000, before he was carried out on a stretcher. The bands would just pay for damages and move on.

Why did they do it? Boredom? Off their heads? Entitlement? Or that same sense of freedom that makes us want dirty sex when we’re set loose in a hotel?

In his book, All The Rage, the keyboardist for The Faces, wrote that Holiday Inns were where they all stayed, and ‘it was not possible to walk into the identical room in 20 different cities without wanting to hurt it just a little.’

Today, concert tours are all about professionalism and the bottom line. Which makes me sad. If rockers can’t behave badly, surely it has a knock on effect on what’s considered acceptable behaviour for us writers?

Even when Charlie Sheen trashed his hotel room in 2010, it was only to the tune of about $7000. Which seems tame by Charlie Sheen standards.

A few years ago, a semi-famous band threw a television out of their hotel room window, because it was ‘the classic rock ‘n roll thing to do’. It turns out they had a journalist with them who was writing a book about their tour, and they only did it so he’d have something interesting to write about. But they were only on the second floor, nobody got hurt, and the band was so apologetic and embarrassed it kind of took the danger out of it.

I’ve got a trip coming up. They’d better watch out, I plan on getting pretty crazy in my hotel room, especially if there’s scotch in the mini bar. They’ll probably have that limited DSTV Bouquet, so I’ll be watching Steven Segal movies on eTV and eating Pringles till three am, then I’ll steal a bar of soap and pass out in a hot bubble bath. Then it’s bottomless bacon buffet for breakfast! Yeah baby, living on the edge. 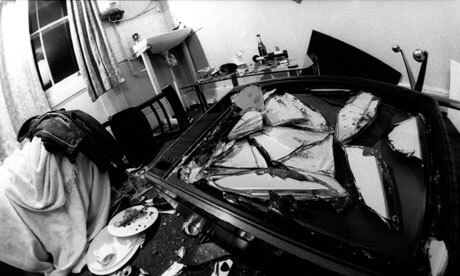