What do you call your vagina?

Morning team, how’s everyone today? Here’s yesterday’s column. Hope you enjoy. Oh and Happy Mother’s Day for yesterday for all you Mums. You rock!

A MILLION MILES FROM NORMAL – By Paige Nick
DOES YOUR VAGINA HAVE A NAME?

Vagina. It’s not really the most romantic word in the English dictionary, is it? Not that ‘penis’ is that much better.

I recently finished writing my second novel and for the most part, writing the sex scenes was excruciating. Partly because I kept imagining people I know, like my mom or my work colleagues or clients reading it and immediately assuming that’s how I have sex. But it was mainly excruciating because I kept running out of things to call my character’s private parts.

The problem certainly isn’t that we’re lacking in synonyms. There are plenty of those. In the penis department there are literally dozens of names for your ‘thing’, ranging from words like ‘dick’ or ‘dong’, to the more scientific, like ‘lingam’ or ‘phallus’, and even sillier names like ‘John Thomas’, ‘todger’, ‘stiffie’ or completely ridiculous terms, like ‘pork sword’, ‘love monster’, ‘joy stick’, ‘love truncheon’ or ‘trouser snake’. There’s also the ever popular ‘Manhood’, but I just couldn’t bring myself to use that.

And of course there are a ton of names for the vagina too. Among others there’s ‘guava’, ‘poon tang’ or ‘yoni’ to choose from. And the ever hideous and unacceptable ‘C’ word, which is too loaded to even type out in full.

But let’s be honest here, there’s nothing very sexy or romantic about any of the words in either the male or female camp, and none will do anything to make my writing more lyrical. In fact, they’re all pretty awful and I shudder to type most of them, particularly the female ones. For some reason they just feel completely silly, totally derogatory, or really disgusting. And the last place you want to gross somebody out is in a sex scene.

So when I was writing I would get as far as ‘he ran his fingers over her….’ and then I would freeze, type in a word. Blush, backspace delete it. Try another word, then hang my head in shame, and delete that too. I felt like as soon as I thrust any of these terms into the scene developing on the page in front of me, the sex I was writing about instantly became less romantic and actually quite hard around the edges (no pun intended).

Some guys out there like to name their Willies. Like if a guy’s name is John, he’ll call it John Jnr. Or if your name is Richard, you might call it Little Richard. I once dated a guy who called his thingy ‘The Beast’, I kid you not!

So for a while I considered doing that in my novel, letting each of my characters name their sexual parts. But that got a little creepy when it came to narrative, for example, ‘… She felt his ‘Mr Happy’ pressing up against her.’ just doesn’t work at all. And another problem with that plan was that women don’t really name their vaginas, well none that I know of anyway, that seems to be purely a guy thing.

Then for a while I was tempted to just leave blank spaces in the book, where the words should be, and leave it up to the reader’s imagination, but my editor wasn’t having any of that. So in the end I took a deep breath and used a handful of choice synonyms a couple of times. But more often than not, to keep things tidy, I avoided naming my characters sexual parts altogether. Like when you bump into someone whose name you think you remember but you’re not sure, so you do the safest thing possible, which is to not mention any name at all.

Granted, it’s the coward’s way out, but really, what other options did I have? Quim certainly wasn’t going to cut it. It’s just not that kind of book.

*Paige Nick’s new novel – This Way Up – is now available from all good bookstores and http://www.kalahari.net/, pulpbooks.co.za etc. 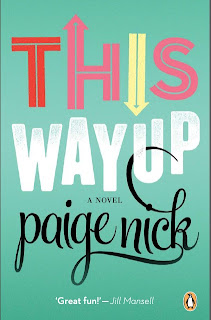 17 responses to “What do you call your vagina?”