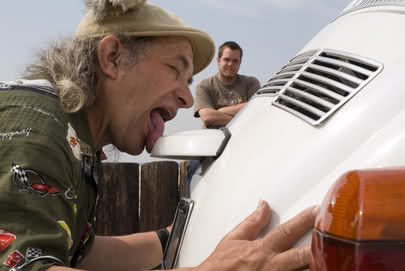 Here’s yesterday’s column, straight out of the gutter and served to you. Hope you enjoy.

OI GET YOUR THINGY OUT OF MY THINGY

It takes all sorts. A woman in France is having regular sex with the Eiffel Tower. When she can’t be there to straddle the struts of the steel structure in person, she shags a mini model-sized replica. Don’t judge her, she’s not just some slag screwing a pole, she’s in a long-term relationship with it – they’ve been married for six years.

Erika La Tour Eiffel married the Eiffel Tower in 2008 and returns as often as possible to consummate the marriage. She also says she’s deeply in love with the Berlin Wall, which raises some eyebrows. Mostly from Eija Riitta Berliner-Mauer, a 54-year old German woman who’s been married to the Berlin Wall for the last twenty-nine years.

We all love certain objects, I’ve got a cactus that holds a special place in my heart, but you don’t see me straddling it without any knickers on. Which is probably because I don’t have Objectophilia. According to Wikipedia, it’s a pronounced emotional and romantic desire towards developing significant relationships with particular inanimate objects.

Fortunately there are only about forty people in the world who consider themselves Objectosexuals, so your garden fence, candlesticks and reading spectacles should be safe, for now.

Mrs Tower is a naughty minx, as she’s a fan of bridges too (Nobody tell the Eiffel Tower she’s cheating on it). As she lovingly finishes graunching the Golden Gate Bridge, she looks earnestly into the camera and says, ‘I am a woman and this is a bridge, and despite our vast differences we are very much in love.’

In a slightly different kind of fetish across town, it gives me some pleasure to report that it’s not just women who are getting it on in crazy town with cold, hard steel.

Until about a week ago I thought you hadn’t lived till you’d watched a grown man French kiss the bonnet of a car. I’ve since changed my view entirely. You should avoid it at all costs.

My good friend Sarah, sent me a BBC Documentary entitled, My Car is my Lover. The short film introduced me to Mechophile, Edward, whose girlfriend is his car. At sixty three years old, Edward’s never been with another human being, but he’s lived with Vanilla, a white VW Bug, since 1982.  There’s also 21 year old, Jordan, who by the end of the doccie is madly, passionately and sexually in love with Todd, his Trans-Am.

Despite proclaiming a deep undying love for their car girlfriends, Mechaphiles don’t seem particularly monogamous. During the course of filming the documentary, Edward also developed a strong attraction to the film crew’s hire car, and we see him surreptitiously stroking it. Later the cameras catch him sneaking out of his motel room in the middle of the nigh to do terrible things to it. It was like watching a horror movie. You can’t help but feel sorry for the poor hunk of steel. Nobody should have to watch a sixty three year old having sex, with a car or a person.

But how does one have sex with a car or a fence, or a wall? For the Objectosexual ladies there’s a fair amount of stroking and straddling involved. While the Mechophilles start off with a light polish and buff, which leads to some heavy chassy petting, then some large scale bonnet licking, and the next thing you know, his whatsit’s up it’s tailpipe. Don’t forget the KY.

In possibly the most ironic statement ever made, Edward looks lovingly at the car as he wipes his ‘love seed’ off its bumper and says, ‘What we have is real.’

Somewhere along the way these people got their lines blurred. It’s the only way to explain why a grown woman would say, ‘I’m definitely physically attracted to this fence, and I’d like to get to know it better.’ I mean I like a good woody as much as the next girl, but this is ridiculous.