my agent of legendariness pointed this story out to me. vegemite spread decided to rename a new creamier version. so they had a competition and 500 000 people sent in their ideas. the winning idea was… (drum roll please…) 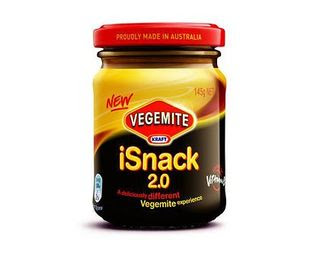 Mr Robbins the man who came up with this bit of genius says ‘he was going for a take on mobile phone and computer technology’.

sadly though, it’s really not going down very well with folks in Australia, or pretty much anywhere really. people online are going insane in the membrane about it, as they do. in fact the topic #vegefail was trending topic number seven on twitter when it was first launched.

and this is what’s so great about the internetweb, nobody is keeping anything to themselves anymore. here are some of the comments i found online about it:

“iSuck indeed… Just awful! iSnack 2.0 is a terrible name for a disgusting product.”

“So unoriginal putting *i* in front of everything!!”

“Dean Robbins, was the iLoser who thought of this ridiculous name! Do not buy this!!!!! Stick to Vegemite!!!”

“I bought a jar and am keeping it to remind me how stupid people can be (not that I need it, I drive a car!)”

“shittest name ever. Vegemite execs who approved this must be absolute muppets”

ISnack 2.0 I wanna upgrade to the next version plz

i thought my ideas were more fitting ‘shite mite’ or ‘transvestmite’?

lots of people on the internetweb using lots of exclamation marks about this.

Some Facebook groups have even popped up, including “Boycott iSnack 2.0!!!”.

and now you can buy the t-shirt: 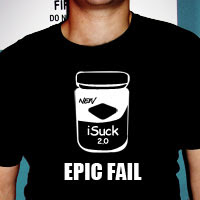 according to this article here, a competition also decided the name of the traditional vegemite spread more than 85 years ago. yes. and look where that left us. vegemite? really?

more recently, according to this article they’ve since decided to can the product due to all the backlash, and are launching a new competition down under for another new name. i’d hate to be the guy hired to sift through all those ideas.

so, epic fail, or massive success? i mean i just spent the last hour writing about it, so maybe…

thanks for the find, ron.

One response to “vegemite – marketing fail or massive success?”