you are my shiny lunchbox is a truly lovely blog.
she has fabulous taste in art, fashion and music, and she keeps her blog looking gorgeous. i’m a big fan.

she is also a very clever lady, because she found this fabulously interesting article and forwarded it on to me. i think she knew that all you smutty readers might enjoy it.

according to wikipedia the world’s biggest gang bang took place in hollywood. they obviously haven’t had a chance to update it yet – too much being brainy and not enough being current methinks, wikipedia:

it’s odd that so many men wouldn’t pitch for a guaranteed fuck, don’t you think? they didn’t even have to buy her dinner or compliment her blouse first. men are strange.

i kind of think that event in hollywood was less like the world’s biggest gang bang, and more like the chill out room at a rave.

the japanese however seem to have gotten it right. as they do.

they assembled 250 men and 250 women in a very organised and orderly fashion. 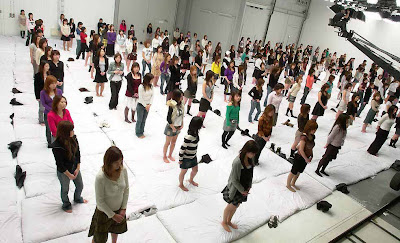 and then they all threw their clothes off with reckless abandon 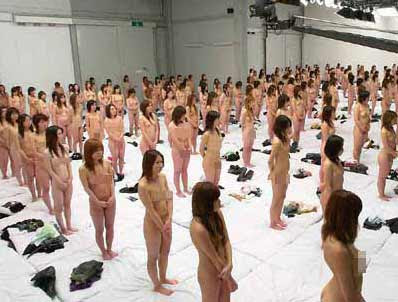 before folding them very neatly next to their bed.

i don’t know about you, but i always fold my clothes very carefully just before i’m about to have wild passionate, crazy sex.

and then they got to work making rompy pompy: 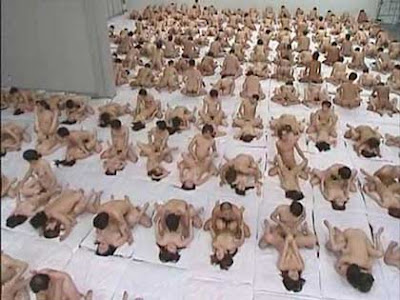 there must be an awful lot of pressure in a situation like that. you don’t want to be the one bloke who can’t satisfy his chick. like the 249 couples around you have all finished and are lying back smoking a cigarette, and the guys are nodding off and the girls are asking them what they’re thinking about, and there you are, still pumping away, with no end in sight.

here’s a picture of all of them afterwards. not very spent looking, are they? it seems all they want is peace. or are they showing the number two? perhaps they all came twice. those japanese are such over achievers. 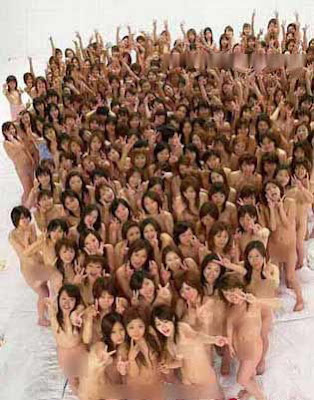