Hi all, and good morning, hope you had a spiffing weekend. If not, no fear, you can give it another bash in five day’s time. Here’s yesterday’s column in case you didn’t quite get to it yesterday.

Man, we are one screwed up bunch of humanity. Sorry, I don’t mean to massively over-generalise. I’m sure you over there, reading this while you enjoy your leisurely Sunday, are a completely normal, well-balanced human being and hardly touched at all. But some people out there… we might just need to invent a crazier word for the word crazy!
Hands up if you use Wikipedia? *And much of the first world throws both hands in the air*. (For those of you who’ve never heard of it, it’s on the computer-machine-thingymajig-abobby and it’s a free online encyclopaedia of awesomeness.) I for one don’t know what I’d do without it.
Remember the good old days of research? Back when it was just you and your musty old set of Encyclopaedia Britannica’s. And if you didn’t have a set at home it required a trip to the library, which you had to walk to, and it was uphill both ways. And once there you had to rendezvous with Mr Dewey and his Decimal System (which should have been called The Dewey Dismal System, sheesh it’s complicated) if you wanted to know where Uzbekistan is (Central Asia) or how big Loni Anderson’s boobs are (37D before she had her reduction). Or who Loni Anderson is? (Look under ‘American actresses in dodgy sit-coms in the eighties.’)
So thank goodness for Wikipedia. But did you know that Wikipedia is not an only child? In fact it has a number of step-brothers, sisters and dodgy aunts?
Let’s start with wikiFeet. The madness here is astonishing. This is a website where people who might have a couple of issues and a little too much time on their hands go to upload pictures and information on celebrity feet. True story.

According to the facts and figures on their site at the time of going to press, the wikiFeet database contains an astonishing three hundred and fifteen thousand pictures of more than nine thousand five hundred celebrity feet. And wait, that’s not all, the wikiFeet home page has been viewed well over twenty five million times.

I struggle to even begin to fathom why we might need this and which freak out there is looking at it over twenty five million times? I suppose people with foot fetishes would be my first guess? Or perhaps people who like to see what shoes celebrities wear? That would be my second, less sick and twisted guess.

But it’s not an all-out crazy-gimp free-for-all over there on wikiFeet, they do have rules. One of which is the following: ‘We accept pictures that show toes, soles and arches. Shoes and socks pictures do not belong on wikiFeet.’ So maybe I’m wrong about the people on it being there for the shoes! I don’t know. 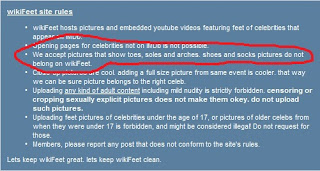 Perhaps this is one of those situations where it’s best not to ask too many questions, and rather move swiftly forward onto another of the Wiki siblings…

Did you know that the Internet also has a Boobpedia? Yup, it’s just like an online Encyclopaedia, but it’s for boobs. I know this because six paragraphs ago I went looking to see how big Loni Anderson’s boobs are.

Or am I the last to know, and everyone else has been surfing Boobpedia for years already? Reading up about Dolly Parton and Pam Anderson (hey do you think her and Loni are related?) and finding out whose boobs are real and who’s are fake, and looking up every possible Kardashian (34D/36C/36ZZ)… oh, sorry I nodded off there for a second. Seriously, who’s got the time or the interest?
Although out of curiosity I did go looking to see if there’s an online Oxford English Dick-tionary, or an EncycloPenis Britanica, in case either exists as an extensive online catalogue of organs of the world. I’m half disappointed and half relieved to be able to report back that these sites don’t exist. Yet.
So while we’re certainly crazy, it’s seems there’s always room for more craziness. And thank goodness for that. If there weren’t so many freaks and lunatics out there, what on earth would I have to write about every week?

One response to “The WonderfulWorldofWierdness”