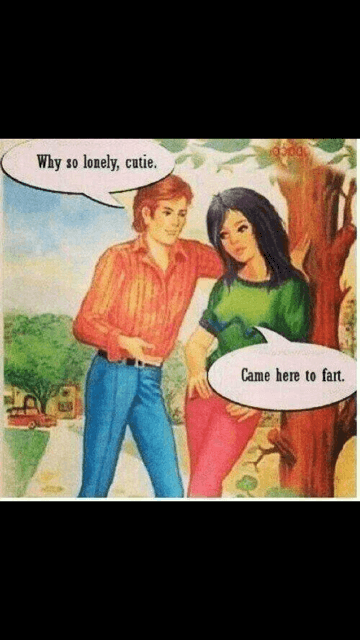 This week’s Sunday Times column is officially dedicated to my girls who aren’t afraid to ‘back-chat’, have a ‘berg wind’ or ‘blow their own bugles’, or even just talk to me about it. I love you girls, thanks for all your support. xoxo

I’ve written a new column almost every single week for over three years now, that’s more than one hundred and seventy columns in a row. In that time, we’ve seen our fair share of large, small and weird penises, men dressed like cocks and women who knit with their vaginas. I’m proud that in all our time together, there has been no subject we haven’t been able to discuss openly and comfortably. Until now.

I’ve finally found something I don’t feel comfortable writing about. The f-word. No, not fuck, I don’t have a problem with that one, I mean the other four-letter F-word. Bear with me, this isn’t easy.

Some months ago, I was having after-dinner drinks at a restaurant with a guy I’d only just met, when he blew his own bugle at the table, then casually said excuse me, and we both carried on as if the atmosphere hadn’t just shifted by ten degrees. I wondered later if he would have done that if I were a really beautiful woman? Do men make air attacks in front of models? Not if they can help it, I’m sure.

The thing is, I know we all do it and it’s a perfectly natural body function, like burping or hiccoughing, but for some reason this one bodily function really disturbs and embarrasses me, even more so when I do it.

Some people (i.e. mostly men) seem to take great pride in it, and will play the backdoor drums at any given opportunity, but I just can’t go there. Even writing about it now has taken more inner strength than most columns.

There are couples who are cool with it too, and they’ll toot in front of each other competitively from day one, coming to the mutual silent (but violent) agreement that it’s simply what’s going to happen and that they’re both going to be okay with it. But what about the other couples? For many, like me, you can hold it all in for a couple of months, but when your relationship gets a little older, at some point, there’s just no escaping it, somebody is going to let one slip. But then what? Do you flat out ignore it, pretend it didn’t happen, blame the dog, or own up and say excuse me? (I want to die at this point. And if it was me doing the tooting, I want to end the relationship altogether, on the basis of irreconcilable embarrassment).

Or is this the kind of subject that a healthy, mature couple who shares a bed regularly should be able to discuss comfortably? Drawing boundaries, setting warnings, and agreeing on safe words.

But how to bring it up, and when? The longer you leave it, the harder it is to discuss. Listen dude, please forgive me, but there may be some orchestral accompaniment to your dreams tonight, after all there were beans in the chili.

I like to think there are couples out there who have been together for fifty seven years, and have never once discussed the fact that one of them might let one slip on occasion. Yes, I’d like to be one of those couples please.

At a dinner party with my closest girlfriends, I plucked up the courage to ask if any of them ever had butt thunder while they were sleeping? One friend said with great pride, that hers were so loud that they often woke up her and her husband. I wanted to climb inside the salt shaker for her.

Did you know that the ‘f-word’ is one of the oldest words in the English language? It’s been around for so long, you’d think I’d be more comfortable with it by now.

You may think I’m being stupid and immature, but I’m not the only one who doesn’t like dealing with this subject. On my Internet travels, I discovered a number of ‘downstairs burp’ thesauruses. Some of which had over five hundred different synonyms for sphincturbulence. I even came across a butt trumpet sound gallery, but there isn’t enough money in the world to get me to click through to that.