Rick Astley. I was a fan.

Back in the day I remember saving up all my pocket money to go out and by his record. Yeah, like I said, it was back in the day.
His song, Never Going To Give You Up, was a big hit in 1985. Some say he was just a one hit wonder, but much like Chuck Norris and Riaan Cruywagen, he’s one of those stars that just keeps on giving (whether he likes it or not).
Rickrolling is a popular internet phenomenon. Basically it’s when you lure someone in to watch something, and just as they think they’re about to get an eyeful of Chuck Norris doing a roundhouse kick, or Justin Bieber singing, or one of the Kardashian sister’s beavers, suddenly on comes Rick Astley singing his hit, and then my friend, you have been Rickrolled.
This caught my eye on the interweb today:
It’s classic ginga.
Here’s another one: 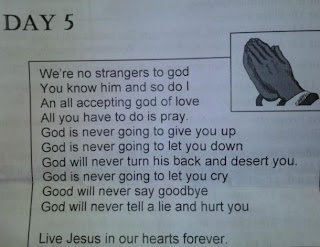 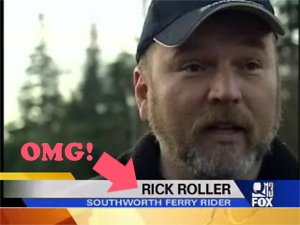 1 thought on “That's just how I Rickroll.”