We all have our distractions. One of the things I do when I’m supposed to be writing, is play backgammon live on Facebook. I warn you, it’s more addictive than crack. And I’m not just saying that, I’ve tried both and crack is way easier to give up.

You play in real time against people from all over the planet, racking up tokens that aren’t worth anything in real life, but have somehow suddenly become more important to me than air.

I think you’ll find, as I have, that it’s a great tool for missing deadlines and falling behind on, well just about everything else that you should probably be doing that has any real social, physical or financial value. I should know, I’ve got a new novel due out in a couple of weeks, so I’ve been spending an inordinate amount of time at my computer for the last forever, and in that time I’ve managed to rack up well over five thousand tokens. That’s just under zero Rands!

You can even play against real friends if you’ve got any, and if you can get it together enough to both be online and in the same virtual game room at the same time. But it’s a bit of a logistical nightmare, so most of the time it’s just you and a bunch of complete strangers from Kazakhstan or Burundi, or Mongolia or Albania or wherever.

There’s also a handy chat function so you can chat to your opponent while you play. I’ve found that much like real life, there are two kinds of people online – the chatters and the non-chatters. It’s kind of like when you’re on an airplane or getting a massage. Some enjoy a bit of a chat to help the time pass, others not so much.

Me, I’m not much of a chatter in those situations. Particularly if it’s early in the morning. Or mid-morning. Or just after lunch. Or early evening. Or late at night. I once spent the first few hours of an international flight pretending I didn’t speak a word of English (I made up some kind of unintelligible sounding Russian), so that I didn’t have to chat to the lady sitting next to me. It was the perfect plan until the stewardess came around with the dinner trolley and asked whether I wanted chicken or beef and I answered her in perfect English before remembering I was supposed to be Russian. In the end I got the quiet flight I was hoping for, although it was slightly icier than I would have liked.

A while back, faced with an extremely urgent deadline, I found myself playing backgammon online against someone called ‘Tuna’. (That’s nothing, I once played against Michael Bubble and another time, against Ervis Persley, you see, you never know who you might run into.) All I could tell from Tuna’s profile was that he was a 30 year old man from Romania. I wonder if ‘Tuna’ is a common name in Romania, like their equivalent of Johan or Sipho? 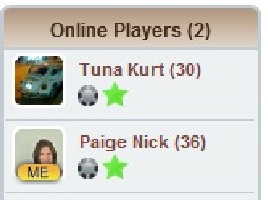 Mid-game it became clear that ‘Tuna’ was a chatter. This is how the conversation went from start to finish, verbatim:

No hello, no how are you! No where are you from? No are you a boy or a girl? No capital letters or fully spelt out words. When I ignored him he added:

Well that’s a bit better, I thought, at least now he’s telling me a bit about himself. I mean if I’m going to marry this guy, these are definitely a few of the small details I’m going to need to know.

People are getting stranger by the second, particularly online. What is this guy’s thought process? That somehow from this tiny bit of contact with a complete stranger, we’ll live happily ever after together? And if he really is an engineer, company shareholder, and sky diving sax player, you’d think there’d be women lining up over there in Romania, like the queue outside the girls loo at a concert, begging to marry him, and he wouldn’t have to proposition perfect strangers on the other end of his internet connection, who apropos of nothing, just happen to be whipping his ass at backgammon at the time.

I wonder if Tuna is his first name or surname? Hmmm Paige Tuna, it’s got a certain ring to it, don’t you think? At least I know we’ve got a hobby in common, and that’s a lot more than I can say for some of the guys I’ve dated.