Okay so I wanted to sum up day one of the inaugural Open Book Festival, but I’m crap with numbers, so I’ll try do it with words. (Crap joke, right? Or is it funny? I couldn’t decide, so I left it in in the end. Sorry if it’s actually lame.)
Thought I’d briefly share some highlights.

First session was a group of local publishers talking about what how and why they’re publishing.

There was a lot of talk about ebooks. It’s not as cheap and easy as everyone thinks to make an ebook. It requires programming and renegotiating contracts and a lot of hidden costs in setting up the technical capabilities. But the good news is that all the local publishers seem to be on it, and making it happen as fast as they can.

As far as paper books go, the right book, with the right author is still selling. Killing Kebble sold out in four days.

Pan Macmillan Publisher Terri Morris says 2% of their sales right now are ebooks.
We can expect that number to rocket.

Another interesting thing from the session:

Despite the proliferation of self publishing, none of the publishers are seeing a drop in the number of manuscripts they’re receiving. Pan Macmillan locally get about 400 of them a year, and very few of those actually get published.

They don’t know whether iPads or Kindles are more popular in this country at this stage. We did a poll in the audience and it was about even. But lots of people aren’t using their iPads for reading on.

Interesting stuff. That is if it interests you, of course. 🙂

The second session was the talented Lauren Beukes in discussion with Jane Bussmann, about her book: 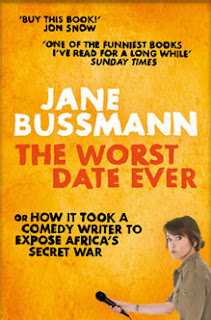 It’s about the atrocities in Uganda. What she writes about is appalling, but very very funny.

She started out doing this as a serious documentary, but she says the trouble about writing about African kids getting kidnapped is that the broadcasters don’t give a shit. Until you make it a comedy, then suddenly people are interested.

She’s not scared of riding close to the edge. When she was writing for a TV show in Britain, one of the episodes she worked on was the most complained about show in history. It was about paedophiles.

You’ve got to love this chick. I’m on page 20 of the book and so far it’s hilarious. I’ll let you know how it goes.

She said that Los Angeles is run by pedicures and chihuahuas, and if they could vote a chihuahua would be governor. Hilarious.
And last session of the day was Steven Amsterdam in conversation with Damon Galgut about his book: 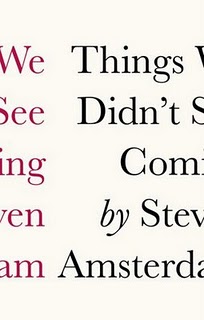 I made a point of reading the book before the session. And both were fantastic.

He was interviewed by Damon Galgut.

The book is sort of post apocalyptic, sci-fi, ish, but not really, cos I’m not a fan of sci-fi and I loved it.
As Amsterdam said he wanted to work through some what ifs. Like what if there’s a pandemic. He says it’s Sci-fi where everything that happens in the book is possible, no flying saucers. And maybe that’s what I enjoyed about it. It’s not sci-fi as I know it at all.

Amsterdam says that in his mind the book is a bit about what would happen if Y2K actually happened instead of just fizzling out.

Alright I won’t bore you with this anymore. Needless to say, it’s a good book and he’s a great author, totally worth checking out.

If you’re in the area Cape Town area between now and Sunday, it’s worth checking out the Open Book programme over here.