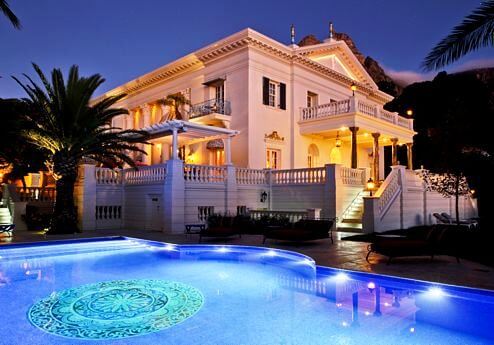 Morning Mondayers, here’s yesterday’s Sunday Times column. If you’re in the market for property, this one might interest you.

AND THE RISING DAMP IS PERRIER WATER

For the last year or so I’ve been looking for a new home, so I’ve been keeping a close eye on the property market. Although clearly not that close, since I managed to miss this gem. There’s a house for sale in Camps Bay for three hundred million Rand. That’s about 30 million euros (29.5 million more than Greece has).

Curious to see what three hundred million rondts would buy you these days, I went snooping on the internet. The mansion has four banquet-sized reception rooms, three en-suite bedrooms, a master suite and a six car garage. Okay, so that’s the first fifteen million taken care of, what in the name of Liberace are we paying the other two hundred and eighty five million for?

Apparently it’s not your typical four bedroom, four bathroom home. This one sits on more than seven thousand square metres and it has a stonker of a view. It’s also dripping in lavish art, sculptures and statues and ridiculous fixtures and fittings. Every light, under-floor heated tile, fireplace, live unicorn, and sound system is controlled by a series of ipads. Nkandla architects and interior decorators are you taking notes?

It also has an Atelier (rich people speak for an art studio), a refrigerator room (us poor people just call that the fridge), a sauna, gym, tea house, massage temple, 3D cinema, staff quarters, winter garden, herb and veggie garden, a dozen terraces, paradise gardens, parks, waterways, ponds, and an Olympic sized swimming pool. A tour of the grounds would take you well over an hour, so don’t forget your Prada hiking boots. It really has every extravagant necessity, from velvet floor-to-ceiling wallpaper to Versace crockery and even solid gold taps and toilet seats.

I get why you need taps in a house, I’m just not sure I understand why you need gold taps. If you’re curious, you could always rent Enigma House for R155 000 a day to find out.

To my mind, the only thing missing is a room the size of Bulawayo, for storing all your money in, and a separate adjoining Gucci-shaped room for cash counting. Oh and a helipad, there’s no mention of one of those. It could probably also do with a teleporter, a white tiger enclosure, an ego massage room and maybe a padded room too, because anyone building something like this has to be nuts.

And speaking of nuts, who’s buying a house like this? I would imagine the only people who can afford it would be a Prince, the artist formerly known as Prince, or perhaps a retired dictator. You’re looking at R2.6 million a month for the bond alone, and that’s not even taking into account rates, electricity, or gold toilet seat polish.

At this price the offers haven’t exactly been rolling in, but according to an estate agent for the company marketing ‘The Most Glamorous Property In The World’, it’s been on the market since last year September and the seller has already turned down two offers.

The first was for R185 million, and the second was for somewhere in the region of 250 million.
I can understand the seller turning down the 185 million rand offer, that’s just cheeky, even in a buyer’s market. You can barely get a decent country, tank and arms cache for anything under 190 mil these days. But turning down the 250 million rand offer makes me wonder if they’re really serious sellers?

When you’re dealing with so many millions how much difference does 50 really make? So you don’t buy another Arabian Stallion that month, or you take the private jet to Paris for your weekly diamond dust facial, instead of riding there on the backs of sixty two virgins, big deal.

If Enigma Mansion sells it will shatter all Cape property records. R110 million is the most anyone has ever spent in this town (cheapskates) and that was for a duplex penthouse in the waterfront. But the real enigma here is if you’re spending three hundred million Rand on a house in August, what do you do for fun in September?