it’s really not easy being a model. i’ve even written about it before over here. remember, there was ‘the girl who needed the toilet’ and ‘the girl who got stung on the lip by a bee’.

not only do you have to be very very thin to be a model. which is hard. but you also have to be beautiful. also hard.

then add on top of that the plain fact that as a model you have to stand around for hours in the most ridiculous get ups and even more ridiculous poses.

this lovely blog really highlights some further difficulties of being a model. ridiculous poses dot com collects and catalogues a selection of the most ridiculous poses that a model might find him/herself in. 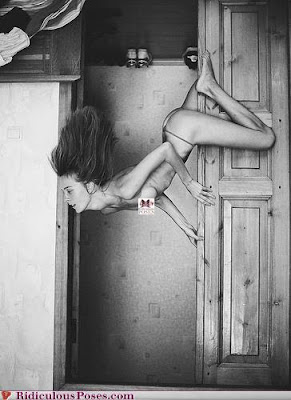 you can just imagine the conversation that night:

model: hey babe, how was your day?
model boyfriend: cool, what about you, what did you get up to?
model: well first they made me take off all my clothes and then i had to balance, upside down, astride a doorway, for seven and a half hours wile they photographed me.

or what about this next one?

when last did you spend a day at work, washing your car like this: 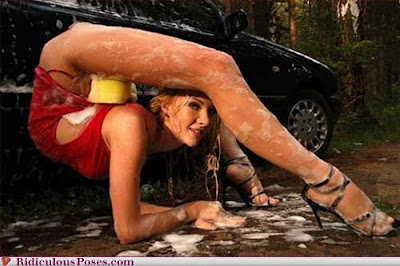 just yesterday? oh really. sheesh.
then the next day she had to do this: 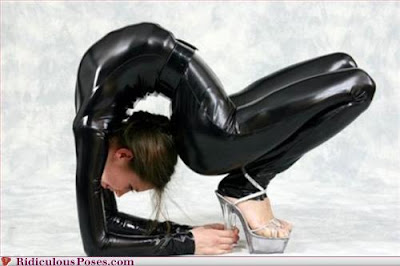 models are always so glamorous, so upmarket, so fabulous: 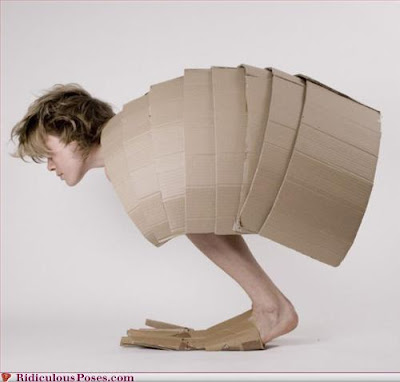 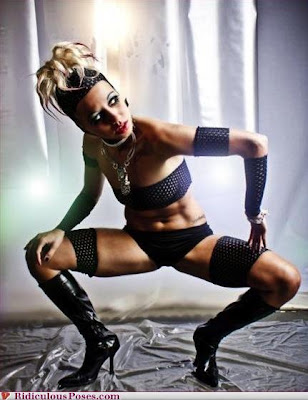 PHOTOGRAPHER: Right, we need you to stick your butt in the air, and then creep along next to the sneakers, but still try to look glamorous. 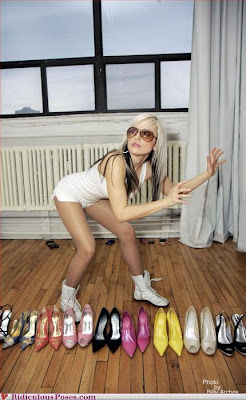 it has to be said, but models also do an awful lot of hanging around. 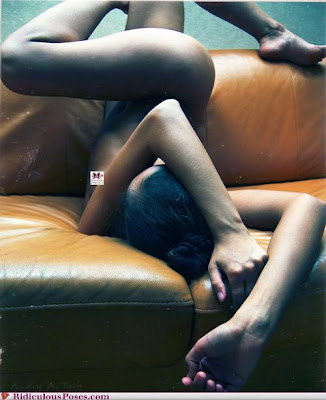 and then sometimes you only get one chance to get the shot right like with this next shot below. if not, it’s back into hair and makeup for three hours with you. see that look on her face? see, she knows how cold that water is going to be and she also knows she’s going to be doing this all day long until she fucking well gets it right. that’ll teach her to only have cucumber for lunch, skinny bitch. 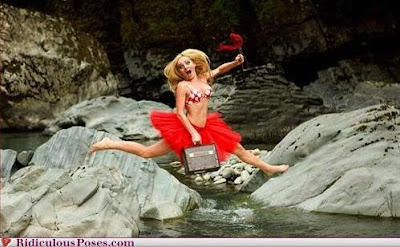 you’ve got to feel sorry for models. seriously though. people do think it’s all glamour, right up until they drown you, just to get their shot. 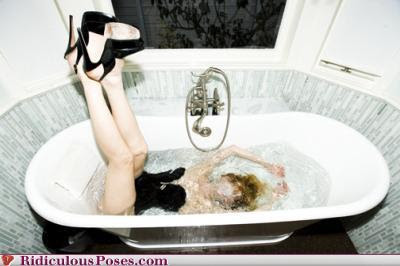 yes, that was good, but one more time, but just hold it under water longer. how about we try for eleven minutes this time? excellent! 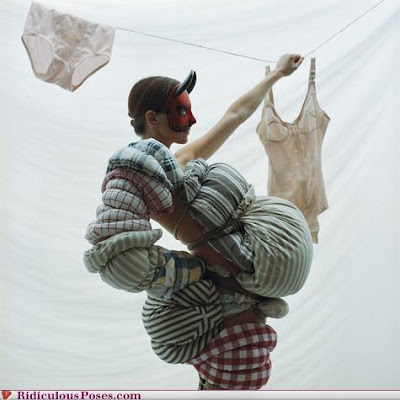 ah those were the days. remember back when we all used to wear duvets wrapped around our bodies and tied with string.
and here’s another door romance shot. 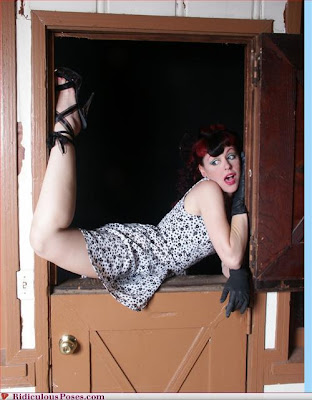 wonder how many splinters she pulled out of her punani that night? 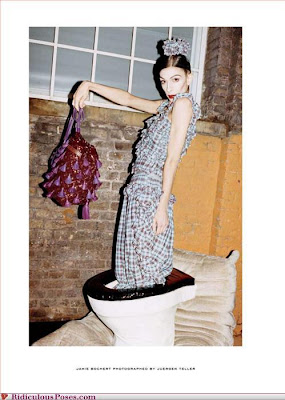 and so while i think it might be nice to be thin, and gorgeous, i’m just not sure i’m cut out to be a model. 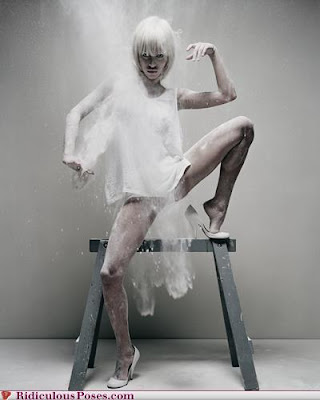 i have to ask myself how long i could hold that position for before i collapsed on the ground, crying in a heap? one third of a second maybe. 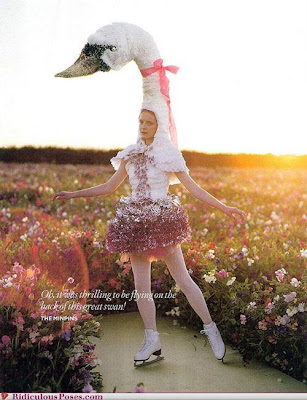 the photographer said he needed you to do what? with a what? 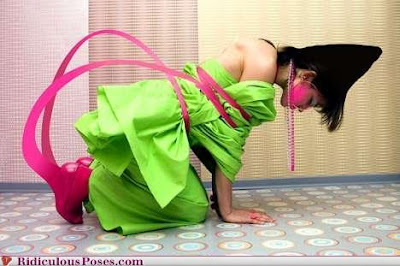 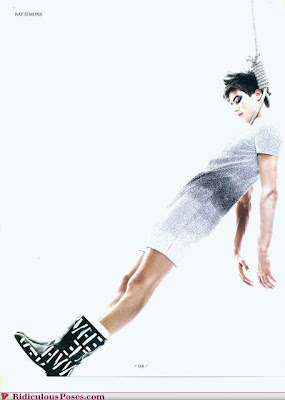 ah the old hanging pose. you seriously don’t want to slip while doing that one. 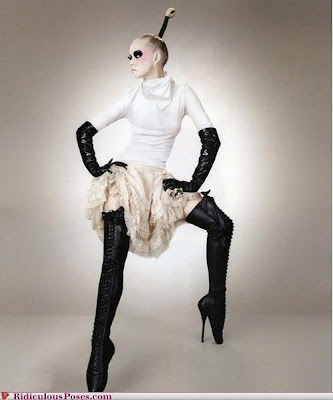 the puns here come so easily. i was going to do a horsey one for the shot above, something about ‘why the long face?’
and then for the one below it was going to be something about this model worried about becoming stereotyped, nobody wants to be stuck in a box after all, but the puns were just too gruesome, so i decided against them. 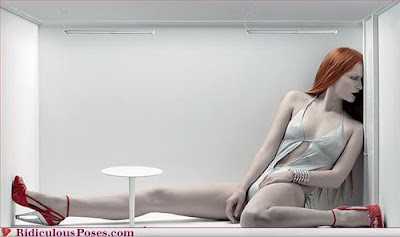 hey is it just me, or does the model above look like she’s got a penis? really, i think she does. well if not a penis, you’d need a big pair of balls at least to go out in that dress.
um, okay this has to be the toughest pose yet: 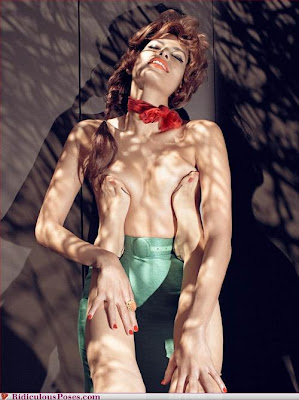 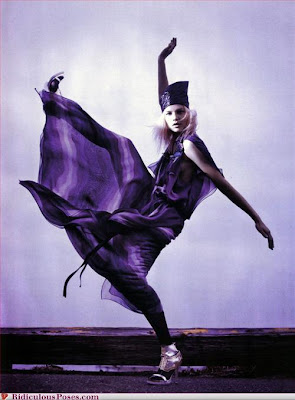 think i’ll stick to being a writer. if that was me above i would have lost my balance, rolled off the log, but managed to grip on with my arms and feet, hanging upside down, my bum just touching the water, naked and screaming in front of the whole crew. not particularly glamorous at all.
see, some of us just aren’t cut out to be models.
more chocolate anyone?

4 thoughts on “it's not easy being a model”