But first I have to give a huge shout out to Mariska Majoor, Berne Meijer and Mirjam Pels – who work tirelessly at The Prostitute Information Centre in Amsterdam (PIC). And who together with Khurram Aziz, took me under their wing and answered every question that exists under the sun. These women do such important work and I’ve been blown away by their kindness, openness and tenacity. They also make a killer bowl of soup.

WHEN IN AMSTERDAM – By Paige Nick

Being a writer is the best excuse. Airline pilots can’t eat a slab of chocolate and then tell others (and themselves) they’re doing it to get the nuances of it right when they have one of their characters do it later.

And I can’t imagine ophthalmologists sport-date so they can do their job better the next day, hitting the perfect mix of tone and detail. Actors are the only other people I can think of who get to act inappropriately so they can draw on it for their work. Or psychopaths, but that’s less a job than a compunction.

So this is how I excuse the fact that I just spent a week in Amsterdam hanging out in strip clubs, chatting up prostitutes and lurking at Red Light District windows. It’s research for a book I’m working on. If I see one more pair of boobs I might lose my mind.

Amsterdam is a remarkable city. Unique for it’s intricate veins of canals, ancient buildings and of course the fact that it’s the only city in the world where both prostitution and marijuana are legal. With that in mind you expect to find it dark, dingy and transgressive, but it’s far from it. Sex and marijuana are a commodity, a tourist attraction. Partaking is the equivalent of visiting the Eiffel Tower or popping in on the Palace Guards in London for a selfie with a Bobby.

I find the area a fascinating melting pot of gaudy gawking tourism, regular daily life, base human instinct and supply and demand. It’s titillating and clinical at the same time.

The two hundred and fifty prostitute windows, where women advertise their nipples, are placed between cheese shops, clothing stores, restaurants and even family homes. In fact it’s some of the most expensive real estate in the city. From the street I watched a prostitute in lingerie sucking on a lollipop luring in a Brit, and in the window of the apartment above her a woman was washing dishes at her kitchen sink.

Tourists of all ages and sexes throng the streets, twenty-four seven. One afternoon I saw a couple with toddlers taking an innocent family photo on a picturesque bridge. They’re going to be surprised when they see the near naked prostitute in the window behind them photobombing the shot. That’s one for the family Christmas card.

Fifty euros will get you fifteen minutes with a prostitute. Which you wouldn’t think would be long enough, but according to research the average man visiting a window only takes about six minutes to get his money’s worth. And that includes undressing and dressing. Not believing it I timed a visit myself, watching a man going in and out (the puns here are a gift really). Seven minutes on the nose.

The women are all sizes, shapes and ages (many over 55). The oldest ever working girl was 82. I was too scared to ask what she died of. But it’s generally not a long-term career choice. Most women only do it for a year or two before moving on, probably to jobs where they don’t have to shave their legs quite so often.

It’s obvious what the guys get out of a visit, but what’s in it for all the women who swarm the streets with friends, lovers and hen party gangs? The city is so sexually charged, I wondered if there was a fit guy on offer whether I’d be up for it?

In an experiment in 2005 they set up a street of windows with straight men. Women flocked, but by the end not one of the men had earned a cent. I guess in order for that to work the men would have to offer dinner, some light banter, maybe a couple of glasses of wine, possibly diamonds and then he’d still have to get to work on giving her a happy ending. And we all know that takes way longer than seven minutes. 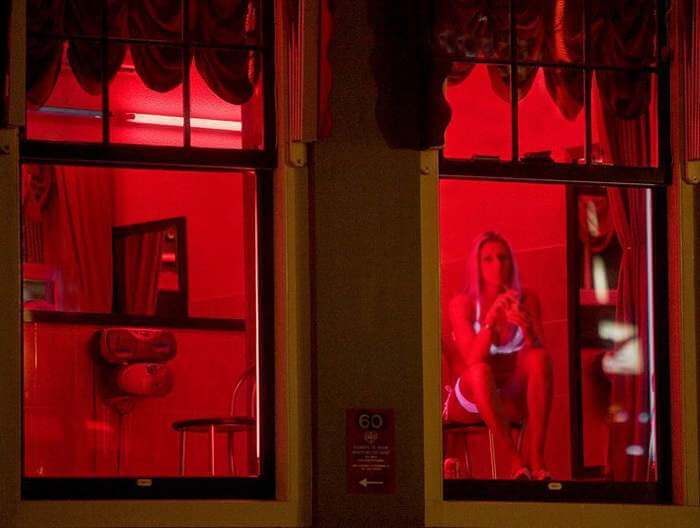