I love the news.
Only because more often than not, you couldn’t make it up if you tried.
Even if you took six tabs of acid and chased it with a vase full of Jack Daniels (you don’t want to know why it’s in a vase) chances are you wouldn’t come up with this.

I saw it in the Sunday paper a couple of weeks ago, and it caught my eye as being worthy of being termed a million miles from normal. 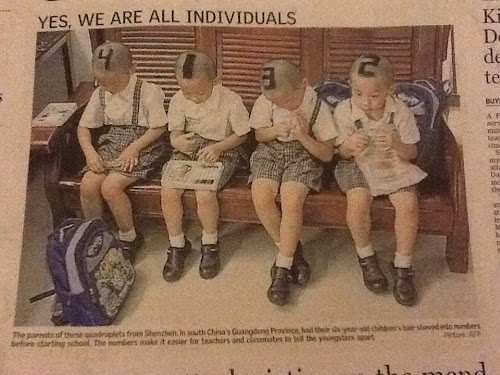 CAPTION: The parents of these quadruplets from Shenzhen in South China’s Guangdong Province had their six year-old children’s hair shaved into numbers before starting school. The numbers make it easier for teachers and classmates to tell the identical quadruplets apart.
I’m no professional, but I’m willing to bet four Peking ducks and a chihuahua that at least one of them is going to need therapy in a couple of year’s time. 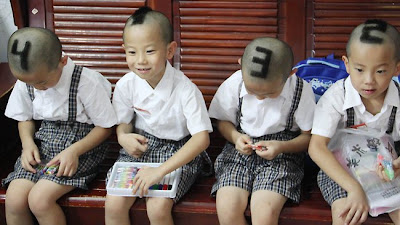 Number One should be safe, at least his can pass for a Mohawk, and that’s so hot right now.

Previous post
Don't forget to ask for references
Next post
What lengths would you go to for a good deal?