I generally write this column for anyone interested in a bit of smut or a laugh. And my attitude has always been the more readers the merrier. But this week is slightly different, because this column is specifically aimed at just one person; Mrs Gabby Amien (41) of Cape Town.

I refer to an article in that credible source, The Daily Voice. A picture of Gaby’s husband, Mr Amien Ajam appeared with the headline, ‘Have you slept with this man?’ And instructions to SMS proof to the number provided. It’s an attempt by Amien, to show Gaby he hasn’t cheated on her.

Some may see this as the ultimate romantic gesture. A Valentine’s coup. Like the time John Cussack stood with a boom box over his head, playing In Your Eyes, in the movie Say Anything. Perhaps years of dating have made me cynical, but I have a different opinion.

Dear Gaby, a public poll isn’t necessary, neither is a massive romantic gesture – there are only two possible explanations for these occurrences. Either there’s a poltergeist in your home, or your husband’s cheating. An exorcism is called for. Either exorcise yourself or him from the house, your choice.

Question is, how do you prove you shagged someone? Unless he has a birthmark the shape of baby Jesus on his left buttock, or shouts out the Greek alphabet when he climaxes.

I don’t know why we lie and cheat. It’s a question that’s been much on my mind. Are we not meant to be monogamous? Many species aren’t. Or perhaps it just feels so damn good that the long-term consequences melt away? Or maybe we think we won’t get caught.

I once dated a guy for months and only discovered he had a daughter after he dumped me. You hear stories of men with families in different towns. And a friend of a friend put her eggs on ice and the day before her invitro, learnt her husband had gotten another woman pregnant.

You may wonder why I’m writing about romantic doom and gloom on Valentine’s Day? I see it as a precautionary tale. Today’s the perfect opportunity to ensure you love the one you’re with, and are with the one you love, and are being honest about the whole shebang, otherwise what’s the point?

And if you’re considering cheating (whatever your sex), instead of thinking with your dick, rather think with your bollocks. Because it takes big balls to speak the truth, but if you don’t, know that it always outs in the end. Whether it’s in the Daily Voice or not. And then it’s those same bollocks of yours on the chopping block. Use them or lose them. 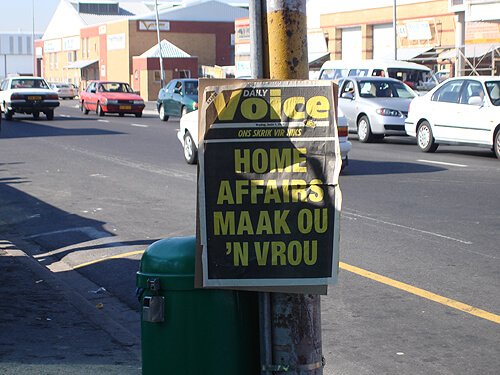