Crazy reaches an all new level

Today’s post ties up to two other recent posts.

But what could those two posts possibly have in common? I hear you ask.

Well, believe it or not, a couple of years ago a bunch of crazy cats began a project to translate The Bible into ‘LOLspeak’, the slang used on the LOLcats website. 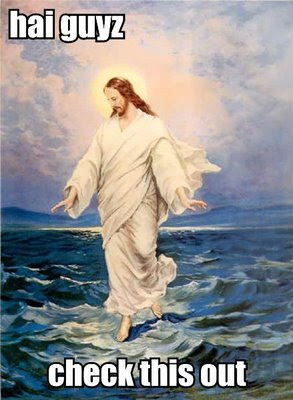 I know it sounds crazy. Well it is.

I don’t know why they did it. I’ve been thinking about it for two whole days now, and I can’t come up with one single plausible reason a person would do such a thing. But they did it.

Look, see, it’s here on Wikipedia, if you don’t believe me.

It’s called The LOLCat Bible Translation Project. It was started in July 2007 by a crazy dude named Martin Grondin. The project relies on people around the web adapting various bible passages and adding them to the ever-growing wiki-based project. 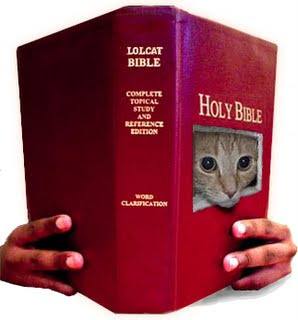 In the process of this translation, all the main characters from The Bible have been changed into cats.

I know, they’re off their fucking rockers, right?

Further translations have also turned the ‘gifts’ and ‘blessings’ of G-d into ‘Cheezburgerz’.

I kid you not.

And general people have become ‘kittehs.’

And since the translation is finally complete, The LOLCat Bible is at last available in book form: 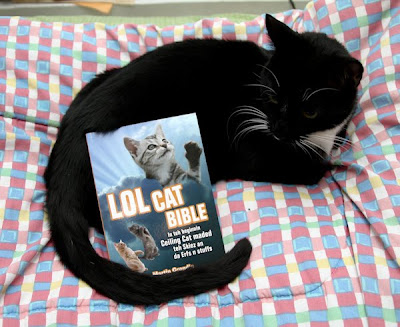 S’true story. Serius. I couldn’t make this shit up, even if I was on a truckload of crack.

Here are the first few verses of Genesis, copied and pasted from the LOLcat Bible Translation Project:
1 Oh hai. In teh beginnin Ceiling Cat maded teh skiez An da Urfs, but he did not eated dem.
2 Da Urfs no had shapez An haded dark face, An Ceiling Cat rode invisible bike over teh waterz.
3 At start, no has lyte. An Ceiling Cat sayz, i can haz lite? An lite wuz.
4 An Ceiling Cat sawed teh lite, to seez stuffs, An splitted teh lite from dark but taht wuz ok cuz kittehs can see in teh dark An not tripz over nethin.
5 An Ceiling Cat sayed light Day An dark no Day. It were FURST!!!
Still don’t believe me you cynic, go here to amazon and buy yourself a copy. 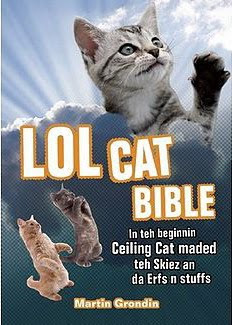 I did a small amount of research (so it may not be entirely accurate) but the original Bible has already been translated into approximately 2 287 languages around the world. Hey, what harm can there be in adding one further language? Even if it is a weird cat language based on bad smsing techniques, made up by a bunch of guys who smoke too much pot.

8 responses to “Crazy reaches an all new level”