The other day over in the internet, a woman named Zoe Stavri, made a loaf of sourdough bread using yeast from her own vagina. 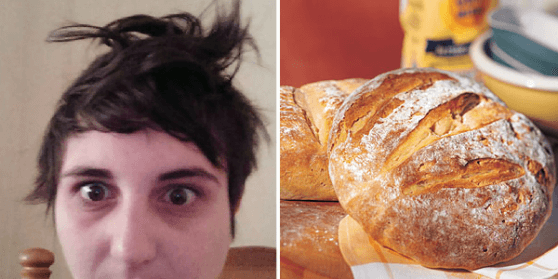 Stavri live-tweeted the whole thing, and provided photographic evidence. She says she’ll continue to post periodically about how her punani bread project is coming along. At the time of her original posting, the starter was still fermenting.

What’s most bizarre about this whole story is that it actually says more about me than it does about Stavri. (It also says an awful lot about the twenties of thousands of people who ‘liked’ her posts, but that’s a whole other column.)

The reason this says so much about me, is that within hours of her story going viral online (with half a billion outraged commenters and outraged-at-their-outrage feminists), this story had already been sent to me by no fewer than five different people.

Which means five individuals who all know me well and have an important place in my life, read that vagina bread story and their first thought wasn’t, ‘oh my!’ or, ‘Perhaps I’ll try Banting after all.’ Their very first thought was, I know who will like this story. And what the hell does that say about me?

I can tell you honestly that nobody ever sends me emails about the budget speech, or some literary snippet, with a note that it made them think of me. Somehow over the last five years writing for newspapers, magazines and a few dirty books, I’ve become ‘that guy’.

I know you’ll find this hard to believe, especially if you’ve ever read much of what I’ve written, but truth is, I’m rarely the person in the room with the filthiest mind, I swear (not that I swear a lot either). It’s you lot. Out there. Nine times out of ten, I’ll be minding my own business at a dinner party, trying to eat ALL the cocktail wieners and dip without a) anyone noticing and b) spilling it down my front, when someone will sidle up and tell me about their cousin who has both a penis AND a vagina, but lives as a man and nobody knows about it (true story by the way). Or about their ex who had such a severe sex addiction that he couldn’t hold down a job for longer than a month (also true). And seriously, how do you expect any self-respecting writer who knows about that kind of thing not to write about it?

I do sometimes wonder if I’ve simply fallen into a typecasting trap (typecasting, what a terrible pun, no wonder nobody sends me literary stuff) and try to imagine what kinds of things I’d write about if all the world’s smut, filth and craziness didn’t somehow naturally gravitate towards me? Does David Attenborough ever wish he could commentate a soccer match instead of the adventures of a dung beetle? But I’ve never come up with anything I’d rather write about. I’ll keep on thinking, but in the meantime please don’t stop sending me the smut.