Bring back the quickie

This column first appeared in The Sunday Times on 25th September 2016.

You see it’s funny because married Jewish women of a certain age and social standing have a reputation for coming up with any excuse to get out of having sex. I bumped into my tax accountant again the following day and told him how badly his joke tanked, and he said in future I should just replace the word Jewish with the religion of the person I’m telling the joke to.

I couldn’t stop thinking about it. It can’t be true that most married or relationshipped-up women over forty avoid sex, can it? I didn’t have to wonder for long, a couple of nights later, at a dinner party with my closest girlfriends, sex came up naturally, as it does. One of my friends is pregnant and she said ‘I used to like everything a lot more than I like anything now.’ But she’s six months pregnant, that’s to be expected. Another friend who is married with two kids said she doesn’t give blowjobs anymore, not even on birthdays. But it was a relief to hear that every woman at the table agreed unanimously that we don’t dislike sex at all. It’s not that we avoid sex, it’s that we avoid long sex.

In our twenties and thirties, we loved long sex. Not Sting vibes, three-days-till-you-orgasm long sex, that’s just silly. More like sex that lasts the whole episode. These days we’re happy if it just lasts the commercial break.

Life is full, we’re busy, we don’t have time for your tantra. A friend at the table who’s married and has two kids said she recently told her husband to hurry up during sex. She thought she was just thinking it, she didn’t realise she’d said it out loud. Another woman at the table said, ‘I don’t like the fiddling’. 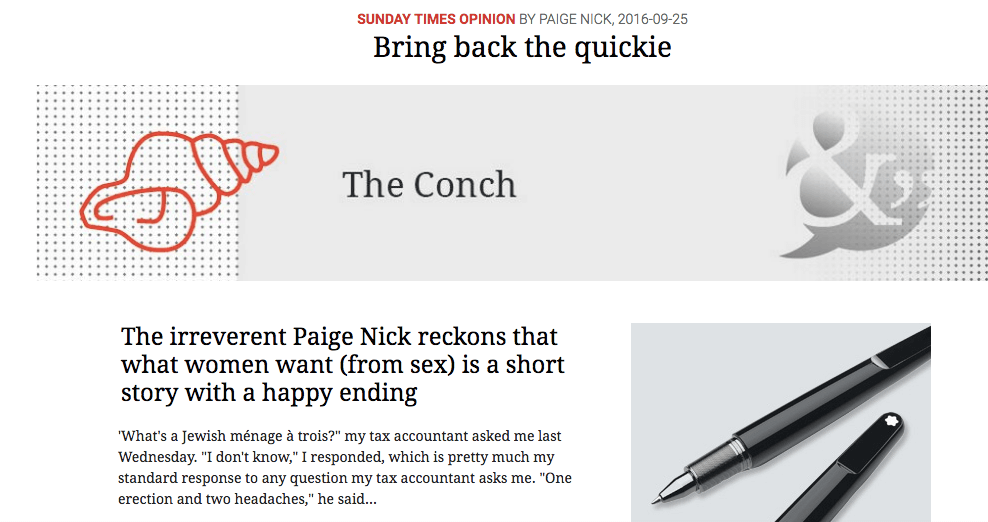 One response to “Bring back the quickie”