Firstly a big welcome to my new home. We’ll have a proper roof wetting as soon as I’m properly settled.

I hope you’ll enjoy it here. Here’s Sunday’s column. Rather a day late than not at all, right?

YOU CAN ALWAYS COUNT ON PORNOGRAPHY.

When last did you watch pornography for something other than the sex? Never! What? You don’t know what you’re missing.

Somewhere along the way the creator of the site became the first man in the history of the world to become bored with pornography. And so he started to pay attention to what was going on in the background in various scenes instead. He now searches out pornographic movies set in classrooms, universities and scientific laboratories, then he pauses on any scene that contains a blackboard and zooms in as close as possible to see what’s been written on it.

He then evaluates, judges and grades what’s been written on the blackboard based on subject, accuracy, levels of difficulty and attention to detail. Essentially he’s getting people to watch pornography for the maths. Which is a little like buying a Playboy magazine for the articles, getting a mango for the pip, or going to watch a movie for the trailers.

The scene is a familiar one, a hot ‘teacher’ wearing librarian glasses and a short, tight skirt begins to berate her only ‘student’. But just before the boom chicka-wa-wa music kicks in and the teacher no doubt drops her pen and then shakes her hair out of its tight bun as she bends over to pick it up, our host pauses the tape and transcribes the mathematical problem and solution sketched on the blackboard behind the teacher:

He also goes on to analyse the problem and conclude that it’s been solved incorrectly. And he kindly provides the correct solution as follows:

Thanks guy, but x = 3 isn’t quite the happy ending I had in mind. Let’s be honest, it’s no money shot.

In another example on the site, a rather skanky-looking teacher is giving a confused-looking student extra lessons after school. Behind them on the blackboard is the sum 1+1 = 2. In this case our pornonerd is concerned that the pretty student who is well into her twenties seems unable to grasp the most simple of mathematical concepts. That teacher really does have his work cut out for him, all the extra-maths lessons in the world aren’t going to help this girl. Perhaps it’s best if she sticks to stripping and doesn’t give up her night job. 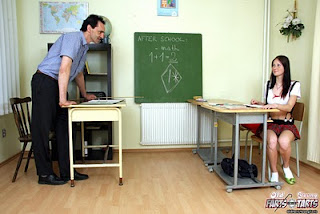 But you’ll be pleased to hear that not all pornographers are bad at maths. One movie scene he’s commented on contained not one, but two blackboards. Both filled with what appears to be rather complex undergraduate-level chemistry.

I picture the fluffer, lighting cameraman, lead actress and director all huddled thoughtfully around the blackboard before the shoot, scratching their heads and painstakingly trying to figure out the chemical formula for orthosilicic acid.

I’m glad that’s what they’re studying; chemistry between actors is the one thing that’s usually lacking in pornographic films. 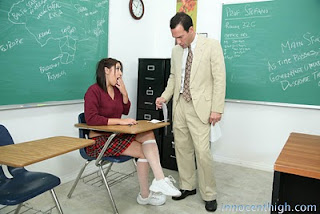