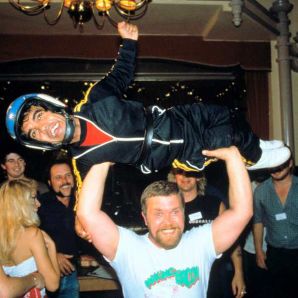 BIG IN JAPAN By Paige Nick

I feel like dwarves are so big right now. We’re not allowed to call them midgets though, that’s frowned upon. They prefer little people or small people. My friend Glen has also heard ‘persons of restricted growth’, which seems politically correct. Both dwarf and midget refers to an extremely short person, but dwarves have a genetic condition, causing disproportionate body parts.

Either way, it feels like they’re everywhere I look these days. I think it’s a case of Baader-Meinhof Syndrome. That’s when you hear about something out of the blue, and then you suddenly start to see it everywhere. You can expect to hear someone else mentioning Baader-Meinhof tomorrow, that’s just the way these things go. Basically, I see little people (whispered in creepy Sixth Sense voice).

Peter Dinklage may have started it all. He’s that super-talented actor who won an Emmy and Golden Globe for his performance as Tyrion Lanister in Game of Thrones. He got me thinking about how great roles couldn’t have been all that easy to come by for little people in the past. There was Snow White, but there are only seven roles to be had there, and then there was Mini-Me and whatever Danny De Vito played and that was about it.

But these days, with the popularity of franchises like Lord of the Rings and Game of Thrones, there’s never been a better time to be a small actor. Verne Troyer , who is only two feet, eight inches tall, hasn’t had it so bad, he shot to fame in the Austen Powers movies, and was then married to a model for 24 hours in 2004. Making his one of the shortest marriages ever, literally. And then in 2008, a sex tape of him with his then live-in girlfriend was leaked. So maybe that old saying is true and there are no small roles, only small actors.

Then out for dinner the other night, a well-travelled friend told us they have Velcro Dwarf Tossing in Thailand. I’d heard about dwarf tossing before, but the Velcro adds a whole new element. My initial reaction, after feeling ashamed for laughing, was to be horrified by this practice. It seems so inhumane and unnecessary. What kind of world do we live in where a person’s body can be exploited for entertainment and financial gain? I don’t know, let’s ask a prostitute.

On second thoughts, much like prostitution, Dwarf Tossing is a thriving industry, providing a solid, lucrative income for many. And as long as there are rules, and nobody’s holding a gun to anybody’s head, why not? At six foot, seven inches tall, Sean Rooney has been tossing his four foot, two inch twin brother for years. It’s no secret which brother drew the short straw in this family. Rooney says there’s a right and wrong way to be a tosser. You grab the handles on the back of your dwarf’s Velcro suit, stand sideways with your feet shoulder-width apart, then swing the dwarf back as high as you can, hurling him or her as far as possible in one swift motion. The longest dwarf toss ever recorded was made by a truck driver, who’s reported to have tossed his dwarf (sounds like a euphemism for vomiting) eleven feet.

While the dwarf toss has been banned in France and a number of states in the USA, it’s treated as a legitimate sport in lots of other places. I doubt we’ll ever see it at the Olympics, but it has rules, techniques and leagues. There’s even a British Association of Dwarf Throwers, and a union. Some of the official rules take the little person’s safety very seriously; ‘If a dwarf is to be thrown through a glass window or door, he (or she) must wear protective clothing, including a suitable mask.’ And ‘Extinguishers must be provided nearby if a dwarf is being tossed through a burning hoop.’ While all reports I could find made dwarf tossing seem a mostly kosher enterprise, I’m still glad I’m five foot seven.

So where as in the past, the main options for dwarves who wanted fame and fortune, seem to have been getting tossed at a wall in a bar, playing the elves at Christmas time, working for rent-a-dwarf in the states, or for a company called Dwarf My Party in Australia (I’m too scared to go see what they offer), or as a dwarf stripper for stag parties in London. But these days, fortunately it looks like for dwarves, the opportunities are growing.

And be sure to check out my new book, Pens Behaving Badly, which is a compilation of crazy columns and the mad letters they inspired. It’s now available here on kindle and will be out on Kobo soon, and as a paperback towards the end of the year: