at some point during my random wanderings online i stumbled across this picture.
that’s the thing about the internet. you start out looking for a company to fix your exercise bike and forty clicks later you’re watching some guy do something very suspect with two clothes pegs. (man is he going to regret that tomorrow!) that’s just the randomness that is the internet.

i have no idea where the image comes from. (apologies if it’s yours and i haven’t credited you, mail me and i’ll rectify asap).

anyway back to this. 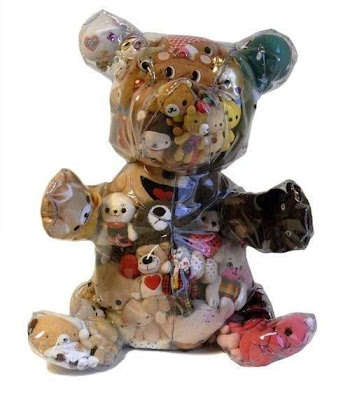 it’s a bear, stuffed with dozens of other bears. how cool is that?

although don’t think about it too much, because then you’ll start to wonder whether that bear actually ate all those other bears, and is therefore a bear cannibal. or then i got to thinking what if we were the same and we were all stuffed with dozens and dozens of other people on the inside. it’s weird and creepy and strange and i don’t think i want to think about it any more.

but still, i do think i want one of those bears.