SEX IS IN THE AIR.

Good old Air Guitar has been around since the beginning of time, thanks to nerds and embarrassing dads everywhere. Cave men probably started doing it with old dinosaur bones. There are even several competitions on the competitive Air Guitar circuit. Contestants are judged on technical merit, mime-manship, stage presence, and something called ‘airness’. Which judges how much the performance was an object of art by itself, and not just some dorky dude pretending to play an imaginary guitar to a Bruce Springsteen track.

Now the smut-mongers are passing through, and they’re taking air guitar with them. Is nothing sacred? Introducing Air Sex. It’s like air guitar, only with less guitar and more sex. I don’t want to sound like a grumpy old writer, and I’m all for crazy, but come on, surely this is a thrust too far?

Like most of crazy, Air Sex was invented in Japan in 2006, by a bunch of bored men without girlfriends. Footage slowly filtered through to America a year or two later, where it appeared at a nerd convention in Florida, and a spontaneous Air Sex competition ensued. Now there are Air Sex competitions popping up everywhere, including an Annual World Championships, a couple of documentaries, and this February, Hollywood is releasing a massive blockbusting rom-com called Love and Air Sex. Please I’m begging you, no. We promise not to knock Justin Bieber anymore, or wear Crocs, please just don’t make this a ‘thing’. 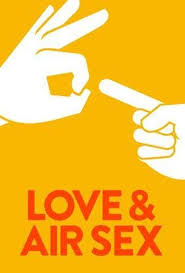 Contestants get about two minutes to mime having sex with an imaginary partner, to a track of their choice. The act must include any and all phases of a sexual encounter, from meeting, to seduction, foreplay and then the intercourse itself and of course the happy ending. Look, there’s nothing new here, women have been pretending to come for centuries, we just don’t do it live on a stage in front of an audience.

The only other rules are that orgasms can’t be real, and the air sexist must shag at least one invisible person or object in their act. Oh and props are allowed. In one video on YouTube, a woman used a bowl of icing in her act. It’s not as sweet as it sounds. In another video there were ping-pong balls. Also nudity isn’t allowed, thank god. The kind of person who wants to simulate sex with an imaginary friend on a stage in front of thousands, is not the kind of person you want to see naked, trust me. Although sadly for the world, the no nudity rule doesn’t stop hairy men with paunches rocking up in American flag g-strings or a pair of chaps and a sweatband. Which you would think would have prevented this loosely termed ‘sport’ from growing in popularity worldwide, but competitions are now held in over 30 cities in the USA and as we speak it’s making its way to the UK in all it’s awkward g-stringed glory.

Watching one seven minute video, I was already cringing 23 seconds in, and had to skip forward twice. And you all know I’m not a prude, it was just unbearable to watch. Imagine the worst, most hirsute actor you’ve ever seen, humping fresh air for a hundred and twenty seconds. I’m going to save you the agony and not even tell you what he was doing with his tongue. And it’s not just men here, women make up one third of the performers, so you get to watch imaginary blowjobs, which aren’t pretty. There’s a reason we do them in the dark, people.

Part of the problem is that anyone who’s spending a lot of time doing this isn’t getting too much sex in real life, so a lot of what they act out isn’t particularly accurate, just a lot of overacted gyrating, gesturing and air humping. I mean if we’re really going to imitate sex properly, surely there should be a lot more fumbling for the condom, leaning on the woman’s hair till she yelps and rolling over into the wet spot.

Nobody, except maybe really bad people, should have to watch a hairy, tattooed, overweight, undereducated American guy in a g-string, simulating sex on a stage. Maybe we can build this into our penal system as some form of punishment. If you rob a bank you’re forced to watch the World Championships live.

I don’t believe in censorship, but in this case perhaps it has some merit. And while we’re about it, let’s ban mime altogether. The Man In The Imaginary Box was funny once, back in France in 1935, when Marcel Marceau did it. Now if you’ll excuse me, I’m off to play air guitar to an old Bon Jovi song, somehow in light of this new iteration, just plain old air guitar doesn’t seem so bad anymore.