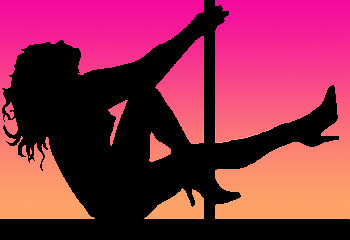 Morning, morning, morning. A few months ago I went to a strip club with a couple of friends, this is the column that came out of it.

It got drastically cut in yesterday’s Sunday Times, so here it is, uncut!

A GIRL WALKS INTO A BAR

The trickiest thing about visiting a strip club is choosing an outfit. Wear too few clothes and someone might shove a fifty in your bra, wear too many and you stick out like a sore thumb.

Co-authoring choose-your-own-adventure erotica gave me the perfect excuse to do dodgy things ‘for research’. Which is how I recently found myself at a Gentleman’s Club with two girlfriends. Both married with kids, so it was an event for all of us.

Entrance is R50 for ladies and R100 for gents, and gets you into the lower level – which isn’t a euphemism, the club has many floors, the lower being the main area. For an additional R200 you can access the VIP and Platinum Lounges. And another grand gets you into The Libarary. Where I assume very little reading happens.

We filed to our table, which had a view of two of the club’s five pole-dancing stages, trying to act like it’s the kind of thing we do every Saturday night. We passed one comfortable-looking couple, but the rest of the clients were men of different shapes, colours and facial hair configurations. The club was over half full, but would become packed within the hour.

Dozens of beautiful, half-naked women rove the club. It’s like the United Nations, with women from Asia, Africa and Russia. As we sat, a dancer in a cop outfit stepped onto the main stage. If that’s what cops wear under their uniforms, it’s no wonder we have so much corruption in the police force.

At no point did we ever feel uncomfy or unwelcome, but it is odd seeing so many women cruising around in high heels, lacy bras and barely there g-strings, carrying handbags. I guess a fanny pack is out of the question and lingerie doesn’t come with pockets. A girl has to keep her tips, wet wipes and sanitiser (to wipe down the pole before she dances) somewhere.

We were offered a few private dances, and when we politely declined we were left to enjoy the show. And what a show. The club runs a slick, well-choreographed operation. Each dancer does a routine on the main stage for two songs, then moves to a secondary pole for the next two.

More our speed were the Chinese ladies in pinafores, offering twenty minute neck and shoulder massages at your table for R80 (not the happy ending kind). ‘Let’s come back every week,’ my friend said, her eyes rolling back in her head as the masseuse kneaded at her knots. When our waitress brought us another round and the menu, mate Loryn said, ‘Throw in a jumping castle and a creche and you’d never get me out of here.’

The menu looks good, if not a little provocative, with pork bangers or beef chipolatas. But I’m not sure I want to eat at a strip club. What if you find a pube in your salad? ‘There are no pubes!’ Teresa said, nodding at the stage. She has a point. There’s less bush here than the Sahara. Every single dancer was Brazillian, even the Russians. Which is odd, as the main impression one always gets of Russian women is how hairy they are. ‘But what if you like a bit of bush?’ I asked. ‘Then you go home to your wife!’ Loryn said.

Besides the obvious differences in height, skin and hair colour, I was struck by how similar the women look. Young, slim, with big boobs (95% fake). Surely the idea of a strip club is that men can live out their fantasies? Guys can’t all fantasise about the same kind of cookie-cutter woman can they? I thought some liked a slightly older woman with curves, or a bigger butt, or generous eighties bush? But perhaps that’s just what us slightly older, more traditionally built women tell ourselves to get through the day. There also wasn’t a single woman with short hair. ‘You can’t do the porn head swing with a brush cut.’ Teresa pointed out.

I found my eye wandering (there’s only so much punani a girl can take). As with any bar, the men ranged from good-looking to terrifying. But do you really want to pick up a guy here? Imagine his disappointment when he discovers I barely have the core to stand up next to a pole, let alone dance on one. And what kind of guy hangs out here anyway? Rich, married businessmen and dodgy douchebags? And as the whole Lolly Jackson story continues to unfold, are any of them crime bosses, offing people between lap dances? Or does that only happen in the movies?

I got thinking about the psychology of it. Women watch men strip for a laugh and a shriek. We know those guys are either gay or so roided up, only the sight of their own pecs can get them hard. But we enjoy the show nonetheless, in a joke-ish, visually stimulating kind of way. Like watching a magic trick, or Joaquin Phoenix.

But these men are more invested in the women, which is odd since it’s like shooting fish in a barrell. They’re mostly available for the right price, and already down to their knickers, where’s the hunt in that?

Suddenly there was a flurry of women taking off their tops and tweaking their nipples. Then the topless parade began – they snaked through the club, across the stage, where the DJ introduced them; Naughty Nadia from Yugoslavia, Luscious Lucia from Ghana. It felt like a weird dream after eating too much cheese. While the rest of the night felt like a slick performance, this felt meat-market-ish.

‘What’s the gratuity?’ I whispered when we got the bill. ‘I don’t know,’ Loryn said. ‘My life experience doesn’t stretch that far!’

It was a hell of a night, but later in bed, when I closed my eyes, all I could see was nipples.

1 thought on “A Girl Walks into a Strip Club”